Renault has taken the decision not to offer a petrol engine in the Koleos, instead giving customers the 2.0-litre diesel engine we already know from the Nissan X-Trail. The Koleos is fitted with an automatic gearbox as standard, helping to mark it out as a ‘proper’ SUV among smaller models and crossovers, which tend to shun the technology in favour of lower costs. Front-wheel drive is standard, while upgrading to four-wheel drive costs around £2,000 extra.

The 2.0-litre version performs well, with the CVT automatic gearbox offering a smooth drive, albeit one that sees the revs rise when you press the accelerator leaving an unpleasant grumble from under the bonnet.

The steering is well weighted and the suspension offers a good compromise between being supple enough to soak up bumps, while still resisting body lean in corners. It offers a more engaging driving experience than some of its rivals, although the Skoda Kodiaq feels more unflappable. Cars of this size are usually at their best at a motorway cruise – and the Koleos is no exception.

However, the 19-inch alloy wheels can crash into potholes and bumps. If you're set on a high-spec model though, we recommend you try before you buy.

Because of its larger size, the 2.0-litre diesel is likely to impress owners. With 175bhp on tap, this Koleos gets going at a decent pace and cruises happily on the motorway, but it is a bit noisy.

The CVT automatic that Renault calls X-Tronic is well matched to the engine; it’s one of the best examples of this type of gearbox. Acceleration is unflustered and smooth progress is possible, without the sudden flare of revs when you need to speed up that affects some other CVTs. 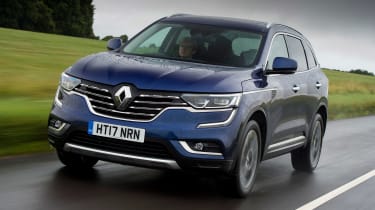 With front-wheel drive, the Koleos gets from 0-62mph in 9.9 seconds, while the four-wheel-drive version takes 10.2 seconds. This puts it on a par with the Sorento and Santa Fe, while the top version of the Skoda Kodiaq is slightly faster.