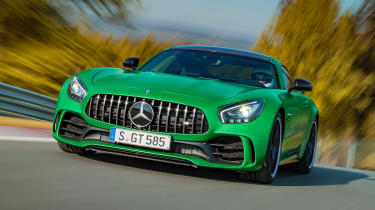 Full prices and specifications for the Mercedes-AMG GT R Coupe have been announced alongside orders opening for the new hardcore sportscar. Available to order now, prices start at £143,245. The hardcore car gets more power, more kit and a more track-focussed edge to the steering, suspension and brakes, while the car's aerodynamics have also been upgraded. 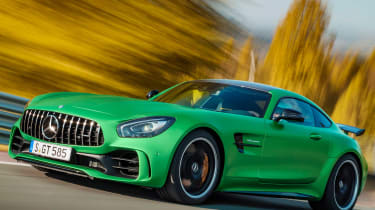 On the outside, there’s even racier body styling than on the standard car, including a jutting front splitter, bulging wheel arches, gaping air intakes, flared side skirts, air vents and a huge adjustable rear wing, all of which makes the GT-R look even more potent than before. You can also specify the optional green hell magno paint - as seen in these pictures - for 'just' an extra £7,500. The alloys at thr front are 19-inchers while those at the back measure in at 20-inches across, while you cana lso see the bright yelloyw brake calipers nestling behind them. You can add high-performance carbon ceramic brake discs for them to grip for another £5,995.

It’s not just the visible stuff that produces downforce, however. The new GT-R features ‘active’ aerodynamics, in which a carbon fibre element extends at speeds above 50mph to help provide more downforce and, subsequently, grip. 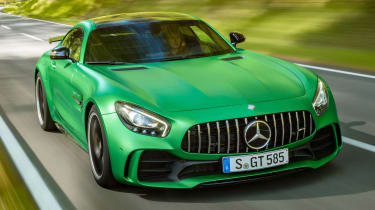 On the inside, you get skinny, manually adjustable leather sports seats to save weight (although electrically adjustable versions are available as a no-cost option) while you can also specify yellow seatbelts (£395) and yellow highlighted dials. The Mercedes-AMG GT-R also gets a new traction control system. 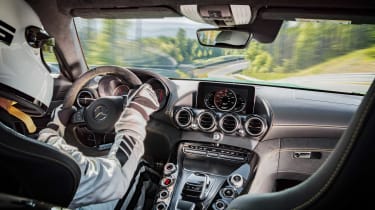 Under the bonnet, there’s an even more powerful version of the standard car’s 4.0-litre twin-turbocharged petrol V8 engine. Developing 577bhp, the new car will cover 0-62mph in just 3.6 seconds before achieving top speed of 198mph. This makes it considerably faster than both the standard GT and the more powerful GT S.

Power is sent to the rear wheels via a seven-speed dual-clutch automatic gearbox, while AMG has tried to make the car sound even more dramatic than the previous model with the fitment of a new sports exhaust.

Along with the extra power, AMG has also uprated the suspension, steering and brakes. These elements, combined with Mercedes’ RIDE CONTROL adaptive suspension setup, means the system can alter the suspension at each wheel depending on a variety of elements. 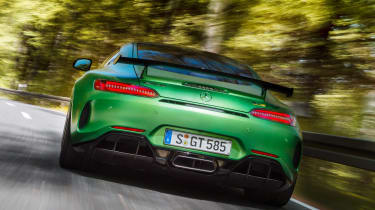 You can also choose from three different driver modes – Comfort, Sport and Sport+ - each of which adjusts the car’s behaviour. There’s a wider track (the width between the wheels) on both the front and rear axle, while the 19-inch front wheels and 20-inch rear wheels are wrapped in super-grippy Michelin tyres.