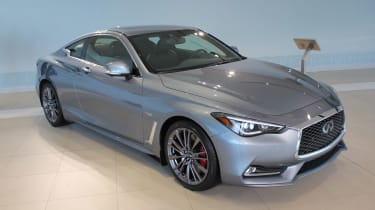 Faster Infiniti models are on the way, the firm’s boss has revealed. The cars will wear red ‘S’ badges and could pave the way for even more extreme models in the future.

The first models will be the Infiniti Q50 S saloon and Infiniti Q60 S coupe, which will be BMW M3 and M4 rivals fitted with a 400bhp 3.0-litre twin-turbo V6 petrol engine. The Q50 S will arrive in the UK in August, followed by the Q60 S.

The launch of the Q50 S will coincide with a series of revision across the Q50 range, chief of which will be a new steering system.

Krueger also suggested even quicker, more extreme Infiniti models are possible in the future. These models may feature wilder styling too. Design chief Alfonso Albaisa has been asked to sketch how these models might look. He said: “I am very much working on this kind of stuff,” he said. “It’s not been given the green light but it is way in excess of what we have seen so far.”