Mercedes is taking on Audi and Volvo with an off-road-styled estate car of its own. The Mercedes E-Class All Terrain was revealed for the first time at the 2016 Paris Motor Show, confirming that the German carmaker is targeting buyers of the recently announced Volvo V90 Cross Country and more established Audi A6 Allroad.

With its raised suspension and chunky styling additions that give it a more rugged air than the standard E-Class Estate, the All Terrain car uses Mercedes’ 4MATIC four-wheel drive system. Diesel will be the sole engine offering when it’s launched next spring, with examples hitting the showrooms soon after.

Prices haven’t yet been confirmed – as with Audi and Volvo rivals, we’d expect the All Terrain to cost a little more than the standard estate it’s based on.

We've driven the E-Class All-Terrain – you can read our review here.

Mercedes has worked on the clean, elegant shape of its luxury estate car to give the E-Class All-Terrain a character of its own. The chunky black cladding around the wheelarches and door sills combine with a raised ride height to lend the E-Class a similarly robust, adventurous persona to other ‘soft-roaders’. 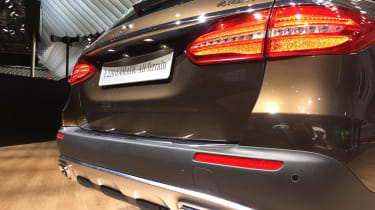 The prestigious standard grille of the E-Class Estate is gone, replaced by a grille similar to those seen on Mercedes SUVs. The result is a front end that resembles those of the Mercedes GLE and Mercedes GLS. The Mercedes brand identity is reinforced by twin spars reaching across and supporting three-pointed star emblem. 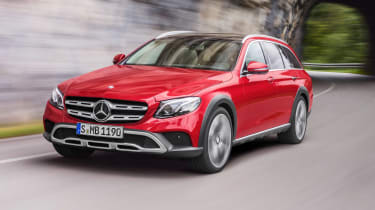 Adding visual weight to the All-Terrain are purposeful chrome-trimmed side skirts, while slightly flared wheelarches house a set of 19 or 20-inch alloys. The look is completed by a restyled rear bumper, an outer load sill protector and a tough-looking chrome skid plate on the underside.

A few new interior accents underline the All-Terrain’s status as a separate model in the range, although much of the standard E-Class Estate’s interior is carried over. There's aluminium and carbon trim on the dash and centre console, while the pedals are stainless-steel with rubber pads to improve grip. You also get floor mats with All-Terrain branding. 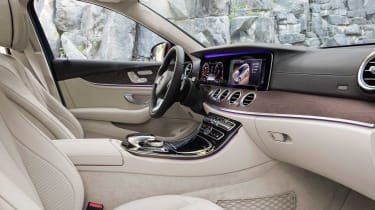 The All-Terrain comes in the SE trim level. This includes cruise control, an 'Audio 20' multimedia system with an 8.4-inch colour display, Garmin sat nav, DAB radio and heated leather front seats. You also get keyless go and all-LED lights front and back, as well as parking sensors and a reversing camera.

Practicality is unchanged from the standard E-Class Estate, with the same 640-litre (1,820 with the rear seats folded) load space and the same 40:20:40 split-folding rear seats. There’s no load lip, either, which should make getting heavy items in and out nice and easy.

Initially, you’ll only be able to order the Mercedes E-Class All-Terrain with a 191bhp 2.0-litre four-cylinder diesel in E220d trim, while a six-cylinder E350d will follow shortly after launch. 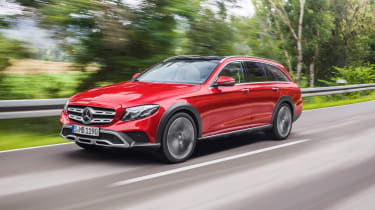 Only technical information for the four-cylinder version has been released thus far. Paired to Mercedes’ 4Matic four-wheel-drive system by a nine-speed automatic gearbox (standard across the range) the E220d All-Terrain will do 0-62mph in eight seconds. 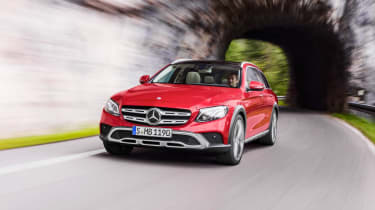 The car claims official CO2 emissions of between 137 and 139g/km, depending on wheel size, which equates to fuel economy of between 53 and 54mpg. If bought before April 2017, the car will be liable for a £130 road-tax bill every year, while it sits in the 27% Benefit-in-Kind (BiK) company-car tax band.

As the Mercedes E-Class All-Terrain has been designed for light off-roading, it has software to optimise grip when the terrain gets tougher. Called Dynamic Select, it offers five different driving modes, one of which is called All-Terrain and has been developed from a system on the Mercedes GLE SUV.

Engaging this mode raises the ride height even further (but limits the car to 22mph) and adjusts the ESP and other driver aids accordingly to help improve grip. It also engages a special display that shows you the current steering angle, ride height, slope angle and angle of inclination, plus a compass and accleration and braking indicators. You can also raise the air suspension independently of the All-Terrain driving mode. 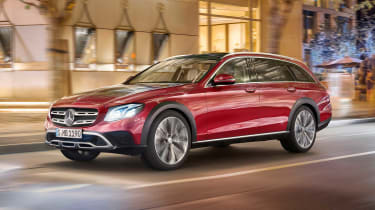 It’s not just electronics that make the E-Class All-Terrain capable off-road, however: it’s also fitted with much chunkier tyres than the standard E-Class Estate, which will give it more grip, while the higher sidewalls should improve ride comfortm too.

The new Mercedes E-Class All-Terrain will make its debut at this year’s Paris Motor Show and will launch in spring 2017. As yet, there’s no indication on pricing – that’ll be announced later this year – but we expect a premium of at least £2,000 (although it could well be more) over the equivalent E-Class Estate, meaning a potential starting figure of around £40,000. This would put the All-Terrain in line with rivals like the Volvo V90 Cross Country, while the Audi A6 Allroad is more expensive still. 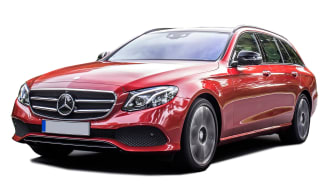