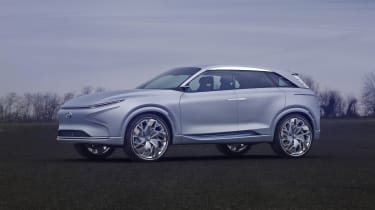 Hyundai has unveiled the FE Fuel Cell Concept on its Geneva Motor Show stand and confirmed that it’ll launch a hydrogen fuel-cell SUV in 2018. The South Korean manufacturer plans to introduce 14 or more new “environmentally-focused” models by 2020.

With radical flowing lines said to take their inspiration from nature and water – the only substance emitting from its tailpipe – the concept is a radical departure from the Hyundai ix35 Fuel Cell and not only in its looks.

While the ix35 Fuel Cell can boast being the world’s first mass-produced hydrogen-powered vehicle and is currently on sale in 17 countries, the technology fitted in the FE Fuel Cell Concept is said to be 20% lighter and 10% more efficient. Not only that, but power density of the fuel cell is said to be 30% better, helping boost its range to 497 miles.

Designed to be as aerodynamic as possible, the FE Fuel Cell Concept has innovative features to aid efficiency, including a rear aerofoil and integrated vents to improve airflow around the car. The ‘FE’ name stands for ‘Future Eco’. 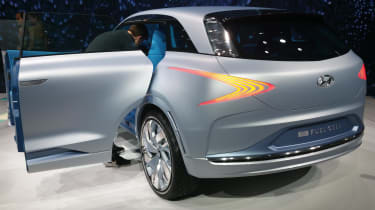 Innovation is present inside, too, where water recovered from the hydrogen power source is fed into the cabin by an air humidifier to make it a more comfortable place to spend time. In another useful twist, the Hyundai has portable battery packs that are charged by the FE Concept’s energy output and can taken with you to power your personal devices. In the boot, you’ll find an electric scooter for the last part of your journey.

According to Woong Chul Yang, vice-chairman at Hyundai, “Our FE Fuel Cell Concept is an important evolution of our pioneering hydrogen leadership and moves us closer to our vision for a ‘Hydrogen Society’, where transportation is clean, efficient and enhances the lives of our customers.”

The hydrogen fuel-cell technology and elements of the design previewed by the FE Fuel Cell Concept will be refined for a production SUV Fuel Cell, which Hyundai says will be ready for launch in 2018. The South Korean manufacturer will also use this model to showcase the next-generation of its ‘Hyundai Smart Sense’ driving assistance technology, which is likely to feature semi-autonomous capability akin to Tesla’s Autopilot.

While the FE Fuel Cell Concept is likely to remain just that, the Hyundai SUV Fuel Cell is expected to be the most expensive model in Hyundai’s range when it arrives in 2018. When the ix35 Fuel Cell went on sale in the UK, it cost around £53,000, which included some subsidies. 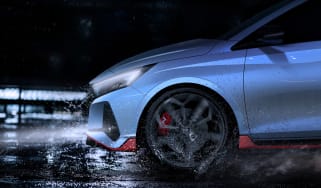