The battle for high-performance coupe glory is set to escalate. An all-new Audi RS5 is poised to arrive within the next few weeks – attacking the BMW M4 head on.

First unveiled at the Geneva motorshow in March, order books will soon open for the £62,900 Audi RS5. In a break from tradition, the previous V8 engine is no more – instead it’ll be the first car to use a brand new turbocharged 2.9-litre V6 petrol engine – likely to appear under the bonnet of other RS-badged models soon.

Moving away from a V8 is a big change, but its huge output power means the 4.2-litre engine shouldn’t be too badly missed. The new 2.9-litre V6 is lighter and more compact than before – 60kg has been shed, which is good news for weight distribution as well as fuel-efficiency.

Audi claims the new RS5 can achieve 32.5mpg, with CO2 emissions of 197g/km – a big improvement on the 26.5mpg and 246g/km of the previous version. Enthusiasts will be delighted that these gains have not been at the expense of power – the V6 produces the same 444bhp as the old engine. This is enough for a 0-62mph time of just 3.9 seconds, which is 0.7 seconds quicker than the old car.

It should be enough to frighten BMW, too – it means the RS5 is two tenths of a second quicker to 62mph than the M4, its formidable arch rival. 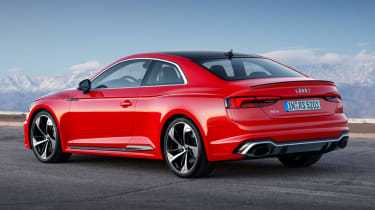 As befits its performance credentials, the latest RS5 will add a muscular edge to the underlying A5’s crisp styling. Audi has distinguished its most powerful four-seater with bigger air intakes and a wider, more pronounced honeycomb grille at the front, while a subtle rear lip spoiler, twin oval exhaust pipes and an unmistakeable diffuser bring up the rear. As with the previous model, the wheelarches are boldly flared and house wide 19-inch alloy wheels.

The RS5 is fitted with quattro four-wheel drive and an eight-speed automatic gearbox as standard. Audi has introduced a different suspension setup for the new car, which it claims improves handling and comfort. Audi’s drive select system allows you to alter the quality of the ride depending on how you want to drive.

The all-new 444bhp Audi RS5 will be available to order from the end of May, with first deliveries scheduled for the summer. The car’s starting price will be £62,900.