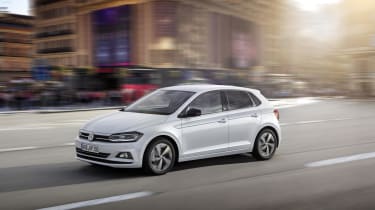 The all-new, sixth-generation Volkswagen Polo is on the horizon, with orders now being taken by dealers. It's far sleeker, more spacious and sophisticated car than we’re used to seeing in the supermini class.

There are two significant pieces of news VW is rightly proud of: the first is the Polo is big. It may not look that large on the outside, but thanks to an all-new MQB A0 platform (first seen underpinning the latest SEAT Ibiza) interior space is set to be up there with the best, while the 350-litre boot puts some cars from the class above to shame.

The next big piece of news is the new Polo is available with some sophisticated options. Although the standard fitment of autonomous emergency braking (dubbed Front Assist) is impressive, it’ll be the digital dashboard dials that – rightly or wrongly – are more likely to woo buyers.

Seven trim levels will be available: S, SE, Beats, SEL and R-Line, along with the hotly anticipated GTI and GTI+ models. Prices for the entry-level S start at £13,855. 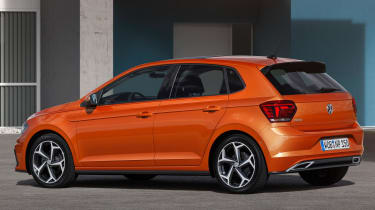 The new Polo is proof inflation doesn’t just apply to money: the 2017 car is longer and wider than the model it replaces, naturally – but you may be surprised to learn it’s actually wider and taller than the VW Golf from 1997.

While it’s easy to fall into the trap of saying it looks like the old Polo, the front-end design is much different, and more closely resembles a junior Golf than ever before. The rear lights, meanwhile, look reminiscent of the Audi Q2’s, while the sharp horizontal crease and scalloped sides lend the Polo a sporting air missing from previous models.

As with the latest SEAT Ibiza, Volkswagen has dropped the three-door Polo for this sixth-generation model – it’s now five doors or nothing. Volkswagen says the new Polo is “masculine”, in reference to its more angular and streamlined looks.

Inside, there’s a big injection of quality and luxury, with technology and features from larger Volkswagens making their way into the Polo’s redesigned interior. The most prominent single item is the option of Volkswagen’s Active Info Display digital dashboard, which sees a customisable screen replace traditional dials. 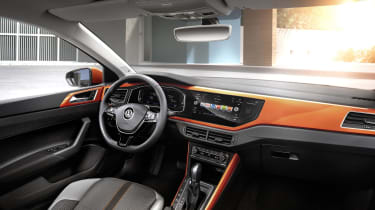 Expect a commensurate improvement in material quality and build, as well as a 2cm more headroom in the back seats, and 1cm more up front.

Stepping up to SE brings a bit more equipment, including 15-inch alloys, smartphone connectivity, an alarm and a leather multifunction steering wheel. 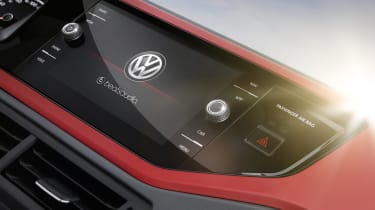 The GTI hot hatchback will get the usual array of sporty styling touches, along with lower sports suspension and an XDS electronic differential to help traction, especially when accelerating out of corners. The fully loaded GTI+ range-topper, meanwhile, will add LED headlights, Volkswagen’s Active Info Display (which replaces the traditional dials with a TFT screen), adaptive cruise control and keyless entry.

The new Polo is likely to spawn an SUV model, just as the SEAT Ibiza has given rise to the forthcoming Arona.

Aside from the Polo GTI (see below) you get a choice of three petrol engines, two of which are available in two different power outputs. The entry-level engine is a 64bhp 1.0-litre non-turbo petrol which can be configured to produce 74bhp, if desired.

Things get more interesting with the 94bhp 1.0-litre TSI turbo petrol, which can also be upgraded, in this case to produce 113bhp.

The two diesel options are both 1.6-litre TDI engines, producing either 79 or 94bhp.

Volkswagen will eventually offer all TSI petrol and TDI diesels in the Polo with a choice of five or six- speed manual and six or seven-speed DSG automatic gearboxes – with the number of speeds dictated by engine choice. For now, selected engine and gearbox combinations are available as the order books open.

Interestingly, Volkswagen is also offering the new Polo with its brand-new 1.5-litre, 148bhp TSI EVO petrol engine, which first appeared in the latest Golf and is only available in R-Line trim on the Polo. But if that’s not enough, there’s also the…

We've a dedicated article on the new Polo GTI, but to summarise: VW has managed to crane a 2.0-litre turbocharged engine under the Polo GTI's bonnet. While no performance figures are available, the 197bhp this produces should edge the Polo GTI closer to a low-six or high-five-second 0-62mph time. 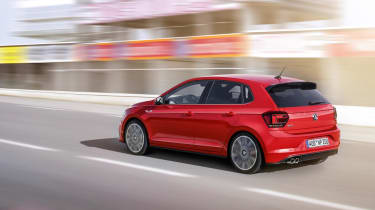 Two big buzzwords for carmakers at present: the new Polo will cater for individual tastes thanks to a choice of 14 exterior colours and 13 dashboard colours – and that’s before you get to the trim levels and various packs offered.

When it comes to technology, think big – the Polo does. Volkswagen is offering it with a couple of semi autonomous systems, including a self-parking feature and – perhaps more usefully – active cruise control with a stop-and-go function. Specify this last option (you’ll need the automatic gearbox, too) and the Polo will take the strain out of traffic jams, keeping pace with traffic leaving you to just steer.

The Polo is the first car to get Volkswagen’s next-generation Active Info Display as an option (or standard on some higher-spec models) – VW claims this makes the Polo the first car in its class to be available with ‘entirely digital instruments’. 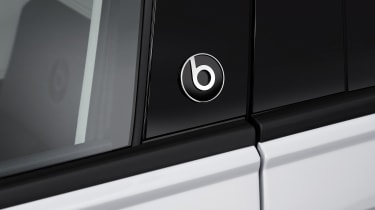 A blind-spot warning system, keyless entry and go, wireless charging and rear cross-traffic alert make it to the options list, as do LED headlights. 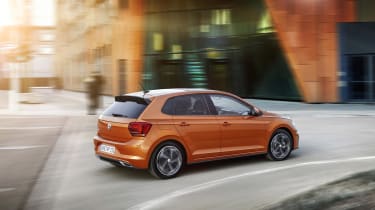 Prices for all diesel and higher-spec SEL, R-Line, GTI and GTI+ models have yet to be announced, but it’s safe to assume that with a few options fitted, the upper end of the Polo range will breach £20,000.