Pricing has been announced for the Volkswagen T-Roc, with the first customer deliveries expected in December 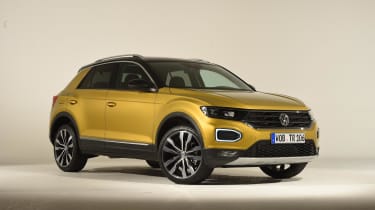 The order books are now open for selected trim levels of the Volkswagen T-Roc, a new small SUV crossover, with prices starting from £20,425. Volkswagen is also inviting customers to put their name down for one of the first 1,000 T-Rocs, giving them the opportunity to get their hands on the car early when it arrives in showrooms in December.

As an added incentive, the first 1,000 cars will also be fitted with a set of running boards from the accessories catalogue for free – a handy £565 saving.

It’s another reason the Volkswagen may give potential Peugeot 2008, Nissan Juke and Renault Captur customers pause for thought. It’s larger than those cars, though, sitting somewhere between them and the bigger Nissan Qashqai. It'll be joined by the smaller Volkswagen T-Cross SUV later on in a burgeoning line-up of high-riding vehicles.

The T-Roc should also make Audi Q2 and SEAT Arona buyers take a second look, as it’s the latest SUV from the VW Group to offer the running costs of a hatchback with the stance of an SUV. Volkswagen goes one step further, saying the T-Roc offers the “dominance of an SUV and agility of a compact hatchback”.

However you look at it, there’s no denying the T-Roc is striking. Its proudly creased wheelarches may have been carried over almost wholesale from the Audi Q2, but elsewhere the T-Roc goes its own chrome-edged way. The front radiator grille and headlights look darker, more assertive and sport heavier silver accents than you’d expect, while at the rear the T-Roc features wide, distinctive lights and wears its name badge centrally below the VW roundel – a bold new corporate styling statement recently seen on the plush Volkswagen Arteon. 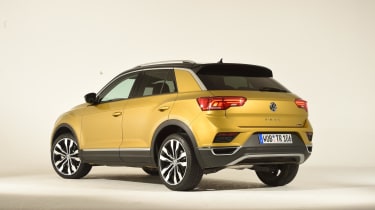 And while we wouldn’t normally delve too deeply into a car’s etymological roots, the ‘T’ in T-Roc pays homage to the car’s larger Tiguan and Touareg siblings, while the ‘Roc’ is intended to emphasise permanence and dominance.

We’ll get onto personalisation shortly, but with six engines, manual and automatic gearboxes as well as front and four-wheel drive to choose from, finding the right T-Roc should be fairly simple.

At the start of the T-Roc range sits VW’s zesty 113bhp 1.0-litre three-cylinder petrol engine, which comes with front-wheel drive and a manual gearbox only.

Next is a 1.5-litre 148bhp petrol, which is available with optional four-wheel drive and an optional seven-speed DSG dual-clutch automatic gearbox – although if you want four-wheel drive, you have to have the automatic with this engine.

Topping the petrol range is a 187bhp 2.0-litre, which comes exclusively with four-wheel drive and an automatic gearbox.

The diesel options are similar: at the bottom of the range is a 113bhp 1.6-litre engine with front-wheel drive and a manual gearbox only. 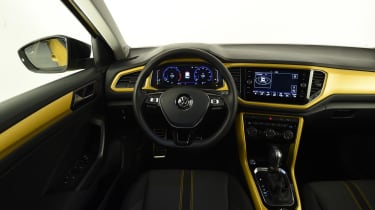 Trim levels have now been confirmed as S, SE, Design, SEL and R-Line, with even the standard model getting dual-zone climate control, an eight-inch touchscreen, Bluetooth, DAB radio, six speakers and 16-inch (or larger) alloy wheels.

Design looks more swish thanks to highlights like chrome trapezoidal exhausts and the choice of a contrasting roof, door pillars and side mirrors, tinted glass and different bumpers with skid plates. Inside, this model will be marked out by a coloured dashpad and door panels, along with ambient lighting that includes strips of light in the door trims.

Those who like to tailor their driving experience as well as the colour of their car may be interested in the optional adjustable suspension. With this fitted, the T-Roc can be switched between three modes: comfort, normal and sport. Other options include keyless entry, a powered bootlid, dual-zone climate control and a panoramic sunroof. 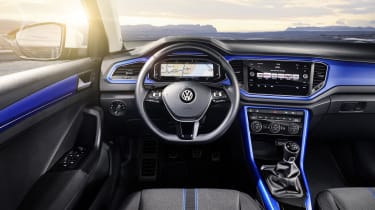 You’ll also be able to specify the T-Roc with LED headlights, VW’s digital dashboard dials (known as Active Info Display), App Connect (which adds Apple CarPlay and Android Auto) and adaptive cruise control. This last system will match the speed of the car in front between 19 and 130mph – or standstill to 130mph if you choose the DSG gearbox. A reversing camera, blind-spot monitoring, a self-parking feature, auto-dipping headlights and traffic-sign recognition are among the other safety systems on offer.

Those protective technologies are in addition to the T-Roc’s standard safety features, which include lane-keeping assistance (which will steer you back into your lane if you stray without indicating), city autonomous emergency braking (which will stop or slow the car for you if it detects an obstacle) and a fatigue warning system, which scans your face for signs of tiredness, warning you if it detects them. 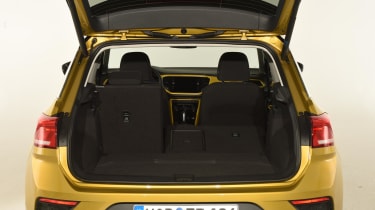 Being larger than many of its competitors gives the T-Roc an advantage where practicality is concerned. Its boot – at 445 litres – is big, being trumped by few rivals. The slightly stepped seating arrangement, meanwhile, means front seat occupants sit around 57cm above the road, with those in the rear resting over 4cm higher. Drop those split-folding rear seats and luggage space grows to 1,290 litres, which VW says is matched by “hardly any other SUV in the class.”

Order books for the Volkswagen T-Roc opened on 3 October, with prices starting from £20,425 for the 1.0-litre TSI model in SE trim. From launch, not every specification is available, but they're all expected to arrive for order before the end of the year.

If you want more power, the 1.5-litre petrol T-Roc costs £22,200 in SE trim, while the same engines in the Design grade cost £700 extra. Choose the range-topping 2.0-litre TSI petrol engine in SEL trim and it'll set you back £31,485 before you hit the options list.