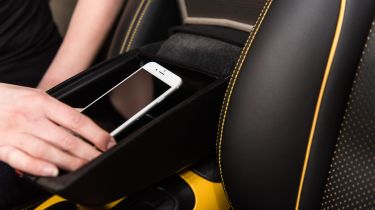 Nissan has unveiled a prototype solution to the distraction drivers face from smartphones when behind the wheel.

The Signal Shield consists of a Faraday cage – essentially a metal mesh – embedded in the central storage area of a Nissan Juke. Once a mobile phone is placed in this, it’s essentially ‘off the grid’, meaning no signals can reach the phone, triggering beeps, buzzes or trills to tempt you into reaching for your phone for fear of missing out.

Nissan happily admits drivers could achieve a similar effect by simply switching their phone off, but given that statistics indicate phone use behind the wheel is on the rise, this is a decision few would seem to be making. The RAC has previously published data showing the percentage of drivers who admitted handling their phone when driving rose from 8% in 2012 to 31% in 2016; Nissan’s own research, meanwhile, indicates 18% have sent a text from behind the wheel.

But provision has been made for those who use a mobile to stream music to the stereo: a USB socket or aux-in port can still be connected to the phone when it’s inside the Shield, which only blocks wireless signals, not wired communications. And while the Shield blocks Bluetooth signals as well as cellular networks, if a driver has connected their phone to the Juke’s Bluetooth, simply opening the central cubby will see it reconnected.

The ever-increasing focus on connectivity in modern cars means the Safety Shield is something of an outlier in terms of infotainment, but given the acknowledged dangers and stiff penalties implicit in using a phone behind the wheel carry, it’s possible ‘nofotainment’ could be the next big thing.