Volkswagen up! GTI now on sale 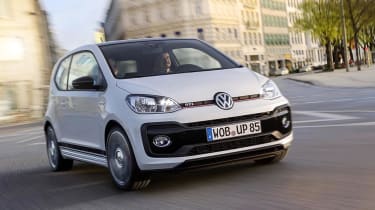 The Volkswagen up! GTI is on sale now, with prices starting at £13,750 for the three-door model and £14,140 for the five-door. Its blend of performance and value-for-money looks set to make it a hit with fans of the traditional hot-hatch formula.

The up! GTI is fitted with Volkswagen’s characterful 1.0-litre TSI three-cylinder petrol engine, tuned to produce 113bhp. That might not sound like much in an age when some hot hatchbacks are producing almost 400bhp and cracking 174mph, but the up! GTI is being heralded as a return to the hot hatchback’s true roots, namely affordable, accessible performance in a sporty package. 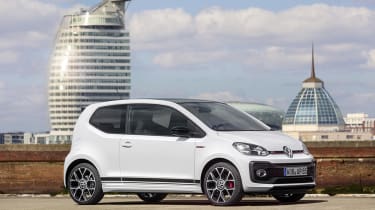 Volkswagen has drawn parallels between the up! GTI and the original Golf GTI of 1975, the latter of which was one of the first-ever cars to feature a relatively powerful engine in a conventional, practical and affordable hatchback body.

In an homage to the Golf GTI, the up! GTI sports flashings of red around its radiator grill, as well as stripes down the lower portion of its side. Other hot hatch cues include 17-inch alloy wheels, black caps for the wing mirrors and a small yet sharply angled roof spoiler at the rear.

Inside, the up! GTI has a leather sports steering wheel, a GTI gearlever and the same ‘clark’ tartan upholstery found in the current VW Golf GTI. 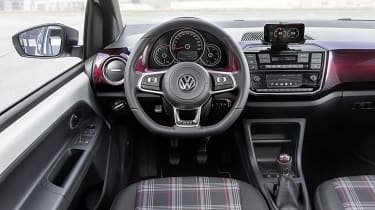 As well as the sporty styling touches, the up! GTI features “sophisticated sports running gear”, including a ride height lowered by 15mm and tweaked suspension. VW says that these changes give the up! GTI “agility akin to that of a go-kart”. 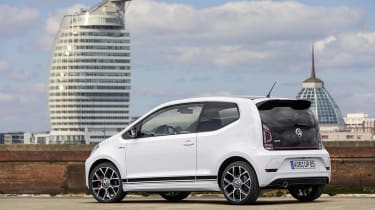 Figures like that should mean insurance for the up! GTI is reasonable, while economy and maintenance are also likely to be palatable. These aspects of the car as an ownership proposition mean some consider the up! GTI to be a return to the principles that made the hot hatch format so appealing in the first place.

The up! GTI will be offered with Pure White, Tornado Red, Dark Silver, Black Pearl and Costa Azul (blue) paint, and if you order any colour other than black, you can specify a contrasting black roof.

Inside, all cars will come with air-conditioning, ambient lighting, a black ceiling, a red dashboard design and and several GTI logos. VW’s Composition infotainment system will be standard as will heated seats, front foglights and electrically adjustable, heated door mirrors.