Read on to find out what the Conservatives, Labour, Lib Dems and other parties are promising motorists 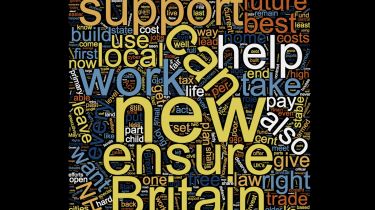 The looming General Election may be a welcome chance to celebrate democracy, but given the vast scope of subjects under consideration, taking a focused approach to the issues at hand is sometimes advisable to avoid drowning in data.

With that in mind, we’ve scoured hundreds of pages of manifestoes for you, rooting out the issues and solutions being presented for cars and their drivers.

So whether you’re interested in potential tax obligations under any future government, you want to know what each party plans to do about air pollution – or you’re just curious what fuel your next car is likely to run on – read on as we break down the motoring policies of the Conservatives, the Labour party, the Liberal Democrats, the Green Party and the UK Independence Party.

The Conservatives – manifesto slogan: “Our Plan for a Stronger Britain and a Prosperous Future”

Cars and vans zero-emissions by 2050

Investment in autonomous and electric vehicles

We already have a fair idea of what the Tories are planning – or rather what they’re deferring to local councils – as the Government was recently forced by the courts to publish its plans for reducing air pollution. These comprise improving local traffic flow to reduce emissions, encouraging the take-up of ultra-low-emissions vehicles (ULEVs), an increase in the number of Clean Air Zones and a possible scrappage scheme – although this last idea is purely hypothetical and would be targeted at very specific vehicles in specific areas.

Elsewhere, the Conservatives consider autonomous and electric vehicles to be fundamental to the future of motoring. The Tory manifesto says the party intends to “spend more on research and development… such as the batteries that’ll power a new generation of clean, efficient, electric vehicles.”

The manifesto goes on to say the UK is “leading the world in preparing for autonomous vehicles” and this should continue, while the UK should also “build on the success of world-beating sectors such as car and aero manufacturing.” And when electric vehicles are not being driven, the Conservatives say “smart grids” will “make the most efficient use of our electricity infrastructure and electric vehicles” – suggesting idle electric cars could be used to power homes and store energy.

And while it’s some way off, on a longer-term basis the Tories want “almost every car and van to be zero-emission by 2050”; £600 million has been pledged by 2020 to help meet this goal.

The Labour Party – manifesto slogan: “For the many not the few”

Make the UK a market leader in ULEV technology

The Labour Party’s manifesto is interesting, because aside from a pledge to “position the UK at the forefront of the development, manufacture and use of ultra-low-emissions vehicles”, the car hardly gets a look in.

Instead, public transport is the main area of focus. The big-ticket item is the renationalisation of the railways, which Labour says would be achieved “as franchises expire or, in other cases, with franchise reviews or break clauses”.

The Labour party also promises, if it gets into power, to “invest in a modern, integrated, accessible and sustainable transport system that is reliable and affordable,” while local councils will get greater powers to “provide first-class bus services”.

Finally, the manifesto sets out a specific plan to “retrofit thousands of diesel buses in areas with the most severe air-quality problems to Euro 6 standards”. While no details are gone into, this could either be achieved by fitting AdBlue systems to them, or even by installing new engines.

No, that’s not a typo – improving air quality is about ULEVs and ULEZs – ultra-low-emissions zones and ultra-low-emissions vehicles. The Liberal Democrats’ manifesto states the party would introduce 10 further ULEZs, presumably over and above London’s forthcoming ULEZ, which is expected in 2021, and planned zones in Birmingham, Derby, Leeds, Nottingham and Southampton.

The Lib Dems will also “reform vehicle taxation to encourage sales of electric and low-emissions vehicles”, while taxis and buses operating in urban areas would be forced to run on ultra-low-emissions or zero-emissions fuels within five years.

But the policy that made the news when it was announced was the proposed ban on diesel car sales. While few details were provided on how this would be achieved without penalising professionals who need the economy provided by diesel, the Lib Dems did make it clear they would provide the carrot of a supporting diesel scrappage scheme. They would also “develop electric vehicle infrastructure including universal charging points,” making electric cars easier and more practical to use.

Renationalise the railways and buses

Encourage diesel cars off the road

It should come as little surprise that the Green Party’s manifesto focuses on improving the environment – both locally and nationally – as well as improving the quality and health of people’s lives.

Other broad-brush policies include the renationalisation of “energy, water, railways, buses, the Royal Mail and care work”, while the Greens state “it should be easy to choose to leave the car at home – or not have one at all”. The Green Party also says “all public transport should be fully accessible and step-free” which one can hardly disagree with – although how this would be achieved is not set out.

The UK Independence Party’s 2017 General Election manifesto is curious, because it contains a not-insignificant inaccuracy. UKIP states that a “scrappage scheme giving diesel car owners up to £2,000 to get rid of their vehicles has also been introduced, and UKIP supports this” – but while there has been talk of a scrappage scheme for older, more polluting vehicles, this is still some way off materialising and may well never do.

Elsewhere, UKIP says it will “put HS2 out of its misery”, choosing instead to “invest in upgrading existing mainline services to create additional capacity”. UKIP would also stop the mandatory fitment of eCall, which all new cars sold from March 2018 must have. While eCall is intended as a life-saving feature that automatically contacts the emergency services in the event of a collision, UKIP refers to it as a “vehicle tracking system”.

UKIP will also invest in “electrically propelled vehicles” which it says are “now a serious option for many families”, although it considers more needs to be done as “the charging infrastructure is not keeping pace”.

UKIP does propose a specific solution to this problem, stating it “will support the installation of rapid charging stations in towns and cities, and encourage off-street parking and charging provision in all new housing and industrial developments through the local planning process”.

The UKIP manifesto states that “[r]oad tolls are modern-day highway robbery” in need of abolishment, while the party has also coined the term “Britdisc” – a tax-disc-style windscreen-mounted identification tag, which would help identify overseas drivers who break UK traffic laws and facilitate enforcement action.