Rear-wheel-drive single-seat electric racer does 0-62mph in 5.5 seconds thanks to 148bhp motor 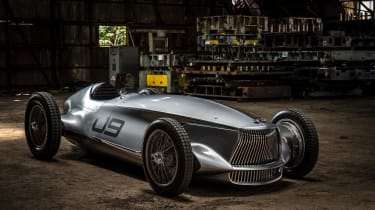 This is the Infiniti Prototype 9, a new prototype car that harks back to single-seat racers from the 1940s.

But while the bodywork is thoroughly retro, under that beautifully hand-beaten metal lies as modern a heart as it’s possible to find: a 120kW electric motor that drives the rear wheels, powered by a lithium-ion battery pack.

Dubbed mitate and shitate, these Japanese principles relate to sourcing and combining the finest materials; the Prototype 9’s cockpit is upholstered in black leather with red contrast stitching, while Japanese flags are stitched into the headrest. 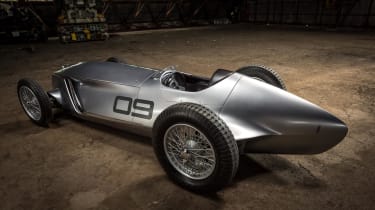 To create a driver-focused environment, the Infiniti Prototype 9’s steering wheel rotates around a fixed aluminium hub, in which rest the speedometer and other gauges. Most of the Prototype 9’s surfaces are hand-finished, while the interior switches are inspired by aircraft design.

The design philosophy behind the Prototype 9 was inspired by a question – namely: “what if we [Infiniti] found a car, down at the southern tip of Japan, buried deep in a barn, hidden from all eyes for 70 years?”

The timeless techniques behind the car are blended with state-of-the-art technology, as the Prototype 9 is fitted with an electric motor that provides a brisk 0-62mph time of 5.5 seconds and a top speed of 105mph. The Prototype 9 rests on 19-inch wire wheels, which feature a race-inspired centre lock, and Infiniti says its batteries are good for around 20 miuntes of heavy track driving. 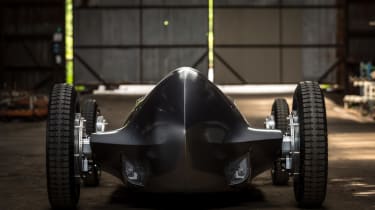 It might seem strange for a company founded in 1989 to launch so retro a prototype, but under the historically inspired body, Infiniti says its new concept car is blended “with the fusion of advanced EV [electric vehicle] technology”. The philosophy behind its creation also references the “seed of passion” planted during Infiniti’s first Japanese Grand Prix.

Thanks to its involvement in Formula One, Infiniti knows a thing or two about advanced powertrains and electric setups. It’s been a technical partner to the Renault Sport F1 team since the start of the 2016 season and contributes “engineering resources” to the team’s energy-recovery system, which uses two motor generators and a battery to recoup power that would be otherwise lost from the car.