“The Infiniti Q50 Hybrid might sound sensible, but a big petrol engine means it priorities performance over low running costs”

The Infiniti Q50 Hybrid is a neatly styled large executive car from Nissan’s luxury offshoot brand. With rivals including the BMW 3 Series and Mercedes C-Class, Infiniti certainly hasn’t shied away from a fight, but in the Q50 Hybrid we can’t help but wonder if its designers mislaid the class form guide.

While the term ‘hybrid’ screams company-car friendly – a critical attribute in this class – the Infiniti has a 3.5-litre V6 petrol engine shoehorned under its bonnet, producing 359bhp in combination with an electric motor. It’s fast, then, but also returns barely more than 40mpg and emits 144g/km of CO2 with rear-wheel drive and 159g/km if four-wheel drive is fitted.

Benefit-in-Kind (BiK) figures of 30 to 33% aren’t likely to appeal to business users, making the Q50 much more costly than the Lexus IS (18% BiK) or BMW 330e iPerformance and Mercedes C350e plug-in hybrids, which both have BiK of 9% and fuel economy of more than 130mpg. 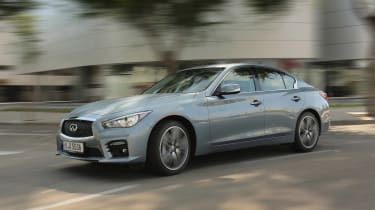 Smooth power delivery and near-silent driving around town go some way to redeem the Q50 Hybrid, as does its decent handling, with suspension able to provide crisp responses and soak up most bumps. The odd-feeling ‘steer-by-wire’ system and brakes let the side down though; the BMW and Mercedes are both likely to appeal more to keen drivers.

Noise-cancellation technology helps keep the Infiniti’s interior serene and it’s a comfortable place to spend time, with enough space even with four adults on board. Technology includes two displays (one above the other) in the dashboard and an array of active safety features. 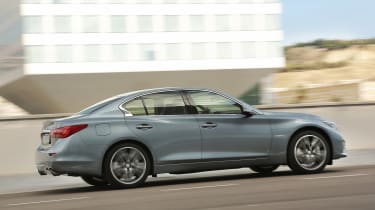 The transformation to hybrid has seen the Q50’s boot shrink to 400 litres, 50 litres down on the Lexus, but beating the BMW 330e by 30 litres. Access is limited by the bootlid, so fitting in bulky objects won’t be as easy as in a hatchback or estate.

With Infiniti sales still a fraction of those industry giants like BMW manage, reliability information is hard to come by, but parent company Nissan was ranked 20th out of 27 brands in our 2017 Driver Power owner satisfaction survey. Safety is easier to ascertain, thanks to a five-star rating from independent crash-test body Euro NCAP.

Despite being a hybrid, the Q50 is more interested in going fast than cutting bills

The Infiniti Q50 Hybrid can return up to 45.6mpg, but this falls to 41.5mpg if you choose the four-wheel-drive version. Doing so has a similar effect on CO2 emissions, which increase from 144 to 159g/km, a change that won’t affect private customers too severely, but increases the BiK band from 27% to 30%, penalising company-car drivers.

If you want a cheap-to-run executive hybrid, the Lexus IS can manage up to 65.7mpg and emits as little as 97g/km of CO2 for an 18% BiK band, but it’s also much slower than the powerful Infiniti. Other manufacturers in the class have decided on the plug-in hybrid route, with the likes of the BMW 330e iPerformance and Mercedes C350e fitted with larger battery packs and electric motors to achieve spritely performance and impressive economy figures. 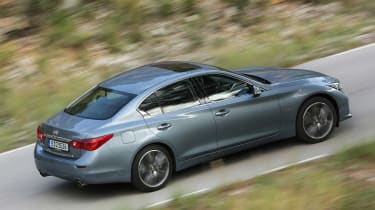 After the first year's CO2-based road tax (generally included in the on-the-road price), all Infiniti Q50 Hybrids cost £130 a year to tax. But with a list price (including options) of more than £40,000, they’re also liable for an additional surcharge of £310 a year in years two to six, bringing the annual bill to £450 during that period.

The Q50 is supplied with a three-year/60,000-mile warranty that’s the same as Lexus provides with the IS, but not quite as generous as BMW or Mercedes cover, which has unlimited mileage for the first three years.

It’s fast and smooth, but artificial steering and brake feel takes away some confidence

You might expect the Q50 Hybrid to come with the smallest engine in the range, but there’s actually a 3.5-litre petrol V6 under the bonnet, making the Hybrid the joint-fastest Q50 version in the range, accelerating from 0-62mph in 5.1 seconds.

The 302bhp petrol engine and 67bhp electric motor join forces to produce a combined 359bhp, providing a strong surge of acceleration. Unlike some hybrids, it’s also possible to drive using just electric power in heavy urban traffic, with the petrol engine cutting in smoothly when required. 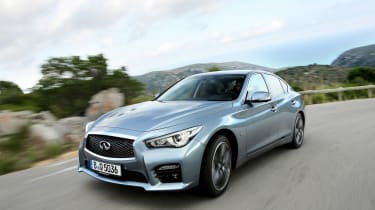 Unlike the IS with its CVT automatic gearbox, the Infiniti has a conventional seven-speed automatic transmission, which shifts smoothly and gives the Q50 a slightly sportier feel. The same can’t be said for the Direct Adaptive Steering – the world’s first entirely ‘steer-by-wire’ system that’s said to provide important benefits, but feels unnatural and vague. With the double task of providing stopping power and feeding energy back into the batteries, the brake pedal also has a somewhat spongy feel.

The suspension is firm enough to suit the Q50 Hybrid’s sporting sensibilities, with little body lean in corners and impressive grip from the sports tyres. It’s hard to tell the difference between the rear-wheel-drive and four-wheel-drive models on the road, so we’d only recommend the latter if you live in a remote area with frequent poor weather.

Refinement is one of the Infiniti Q50’s key strengths and it’s pretty comfortable, too

The Hybrid is the best Q50 in the range for interior refinement, with none of the clatter of the diesel engine, near-silent running at low speeds and a smooth hum under acceleration. Not only is the cabin well insulated, but Infiniti also uses a clever noise-cancelling system to reduce unwanted sounds.

While the suspension isn’t soft or wallowy, most bumps are dealt with before they shake the interior and one benefit of the steer-by-wire system is reduced ‘kickback’ through the steering wheel if you hit a bump. 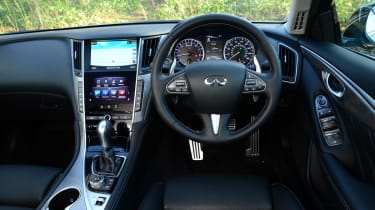 The dashboard looks advanced thanks to its two central screens stacked above each other and the blue-rimmed gauges and information display in the central console, but some materials and switches also look disappointingly cheap. The twin screens work in a novel way, with the seven-inch lower touchscreen used to control vehicle functions while the upper eight-inch screen displays sat nav and entertainment.

Hybrid technology reduces boot space, but the interior is comfortable

Executive cars need to be comfortable and well appointed to impress any clients you may need to transport, while also doubling up as family cars. The Q50 is large enough to seat adults in the back seats without bruised knees, but the bootlid isn’t as practical as a hatchback and the boot itself can only swallow 400 litres. This is 100 litres less than the non-Hybrid Q50 and 50 litres down on the Lexus IS. 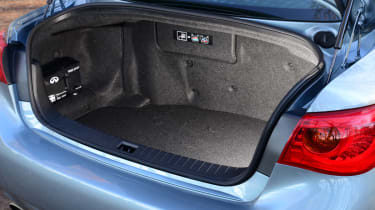 Safety is assured by a good crash-test performance, but reliability is somewhat unknown

Infiniti still has a small presence in the UK, with just under 2,900 sales in 2016 compared to 14,000 for Lexus and around 180,000 each for the popular Audi and BMW brands. This means there’s little reliability information to go on, but several manufacturer recalls have been issued for models built before 2015. Infiniti didn’t appear in our 2017 Driver Power owner satisfaction survey, but parent company Nissan was ranked 20th out of 27 manufacturers, with 15.8% of customers reporting a fault within the first year of ownership. 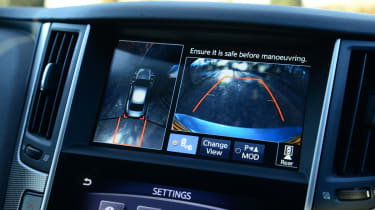 Safety is much less of a grey area, because the Q50 was awarded the full five-star safety score by crash-test experts Euro NCAP in 2013. This included individual scores of 86% and 85% for adult and child occupant protection respectively and an impressive 81% in the Safety Assist category for included safety kit.

The Infiniti Q50 Hybrid is certainly expensive, but it does come with lots of kit

Costing more than £40,000, the Infiniti Q50 Hybrid certainly isn’t cheap, with a price tag of around £10,000 more than the slower Lexus IS 300h. Perhaps more surprisingly, the Infiniti also costs more than the BMW 3 Series 330e iPerformance and Mercedes C-Class C350e (after the plug-in car grant is deducted) which are plug-in hybrids with large battery packs, making them considerably cheaper to run but with similar levels of performance.

At least you shouldn’t need to spend much on extras, because the Infiniti comes with most kit fitted as standard, especially in Sport Tech specification. There’s a Design Pack bringing wooden interior trim, upgraded leather, a black roofliner and dark chrome trim for the steering wheel, gearlever and interior doorhandles for £1,500, while adding a sunroof costs £880.

This car scored 3.0 on our sister site DrivingElectric 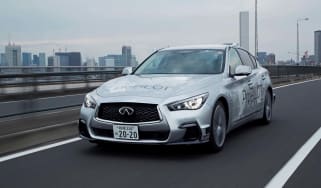 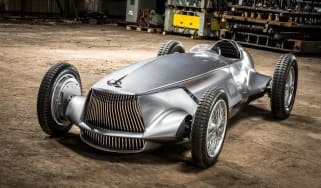 Rear-wheel-drive single-seat electric racer does 0-62mph in 5.5 seconds thanks to 148bhp motor
Skip to ContentSkip to Footer