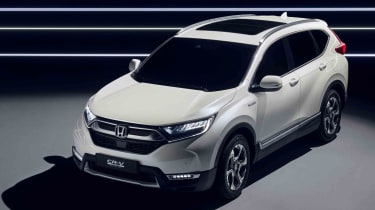 The Honda CR-V Hybrid is on its way and the prototype you see here comes ahead the company’s first-ever petrol-electric SUV.

But it’s not just the CR-V Hybrid this prototype previews: it sets the tone for a forthcoming new CR-V, which is already on sale in the US and due for UK shores later this year.

And as if that’s not enough, Honda has also announced that once the new CR-V arrives in Europe, it’ll no longer be offered with a diesel engine.

The CR-V Hybrid prototype features a 2.0-litre petrol engine and two electric motors. One of these powers the wheels, while the other works in conjunction with the engine, acting as a generator for the batteries.

Although some caution is advised due to the prototype nature of the car seen here, it’s likely the three driving modes Honda has detailed will make it to the production Hybrid CR-V. In EV Drive mode, the CR-V Hybrid will act like an electric car, moving almost silently on battery power alone.

Engine Drive mode is self-explanatory and sees the CR-V Hybrid powered directly by the engine, with the battery and motor adding in extra oomph when more power is required.

Such a sophisticated setup means the CR-V Hybrid prototype does away with a conventional gearbox, instead having a “single fixed-gear ratio that creates a direct connection between moving components”.

As previously mentioned, the CR-V Hybrid in these pictures remains a prototype – but it closely resembles the production CR-V our American cousins are currently enjoying. The overall shape of the CR-V remains the same as the outgoing car, but the head and tail lights, as well as the front and back bumpers, have changed. 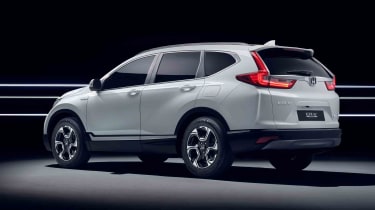 Honda says the CR-V Hybrid Prototype is wider, taller and longer than the current production CR-V and it looks likely these dimensional increases will be carried over once the new model arrives.

One thing that won’t be carried over is a diesel engine. While the current CR-V is available with a 1.6-litre diesel in two power outputs, the arrival of the new CR-V will mark an end to that being offered in Europe. It’s easy to interpret this as a telling move, but Lexus has used a similar tactic for some time, selling conventional petrol models together with petrol-electric hybrids, while declining to fit diesel engines.

When it goes on sale in 2018, Honda will offer the new CR-V with a conventional petrol engine: a 1.5-litre turbocharged four-cylinder. In the latest Civic, this produces a decent 179bhp.