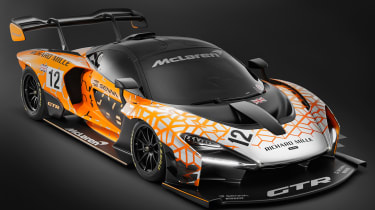 McLaren has unveiled the Senna GTR Concept, an extreme, track-only version of its new road-legal hypercar. The car made its debut at the Geneva Motor Show, where McLaren CEO Mike Flewitt confirmed 75 examples of the GTR will be produced.

An exact specification will be released at a later date, but we know the Senna GTR will have at least 814bhp, which would represent a jump of 25bhp from the standard Senna. An increase in aerodynamic efficiency and downforce from the car’s enhanced and enlarged splitters, diffusers and rear wing, combined with slick tyres, revised suspension setup and a racing gearbox, means the GTR, with the exception of the manufacturer’s Formula 1 cars, will be the quickest McLaren ever.

The GTR version of the Senna will use the same 4.0-litre turbocharged V8 engine as the standard model, but the power hike will make it even quicker than the ‘basic’ Senna’s 0-62mph time of 2.8 seconds. The aerodynamic improvements mean the GTR will be able to generate up to 1,000kg of downforce, so its cornering ability should be at least as impressive as the GTR’s straight-line speed. Flewitt added: “the very limited number of customers who secure this car will be buying the closest experience you can get to a race car without actually lining up on a circuit.” 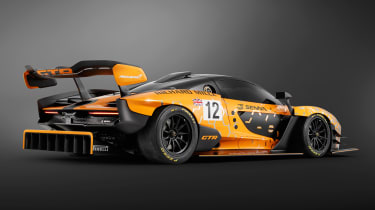 Prospective owners can register their interest in the GTR now, but should be aware the car is set to cost around £1m. McLaren design engineering director Dan Parry-Williams explained that: “The McLaren Senna GTR Concept unveiled in Geneva is not the finished article, but it does give a clear indication of our thinking for the car.”

The Senna GTR will come with a new wheel design deliberately engineered for track use and it seems very likely that buyers will be able to add to their seven-figure bill with options from McLaren Special Operations, the arm of the company dedicated to producing exclusive and personalised versions of its cars.

MSO’s work can already be seen in the 'Carbon Theme' developed for the standard Senna. A gloss carbon-fibre bodykit, made up of 67 individual parts that show off the weave of the material, is the most eye-catching element of the almost £300,000 treatment given to the Senna by MSO, which is dedicated to producing exclusive and personalised versions of the brand's cars.

McLaren says the set of carbon-fibre body parts takes around 1,000 hours to produce, with another 250 hours spent on Solar Yellow detailing for the sills, rear wing and aero blades of the company's most extreme road-legal car to date. Laurel Green brake calipers combine with the yellow touches to pay homage to the colours of Ayrton Senna's crash helmet, which itself was designed to incorporate colours from the Brazilian flag.

The colour scheme is continued inside the car, with contrasting stitching and door struts in green and leather highlights in yellow.

The Senna Carbon Theme will be on display with optional MSO seven-spoke carbon-fibre wheels that are 10% lighter than the standard set. The wheel will be the only alternative to the standard one, which is available in three different finishes, and will be offered in Diamond Cut and Stealth finishes. 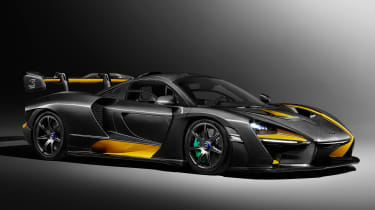 Ansar Ali, managing director of MSO, explained that McLaren Senna customers are already in the process of customising their cars, and that the Senna Carbon Theme is a timely demonstration of exactly what MSO is capable of doing. "With the car having generated so much interest since its unveiling in December, we knew we needed to produce something very special in order to showcase the unique talents of McLaren Special Operations," he said.

McLaren released performance figures for its forthcoming Senna hypercar earlier in February. The car – which is already sold out – will be able to do 0-62mph in 2.8 seconds and go on to a top speed of 211mph.

The McLaren Senna uses a 789bhp twin-turbo V8 petrol engine and has a body made entirely from carbon-fibre to keep it both stiff and light. The car tips the scales at 1,198kg and has a better power-to-weight ratio than McLaren’s previous flagship model, the P1. The Senna’s power output means it'll become the most powerful road-legal McLaren ever made.

The car’s low weight and wealth of power mean performance is remarkable and perfectly suited to its track-focused nature: 0-124mph takes just 6.8 seconds and 0-186mph just 17.5 seconds. The car will even cover a quarter mile from a standstill in 9.9 seconds – a feat that makes it quicker than the McLaren F1 hypercar of the 1990s.

The shape of the Senna has been designed with aerodynamic efficiency and downforce in mind, with McLaren saying the car will give “the most intense circuit experience of any road McLaren” as a result.

The car’s name is in honour of Ayrton Senna, the legendary Formula One driver who race for McLaren from 1988 until 1993. All 500 examples of the car have already been sold, and a portion of each car’s £750,000 price tag will be given to the Ayrton Senna Foundation, an NGO that funds educational projects for children in Brazil.

Indeed, the final build slot was sold at a private auction, fetching £2 million for the charity. 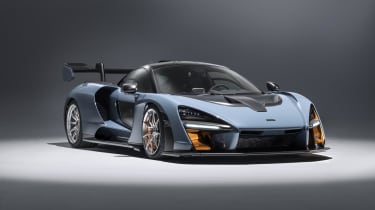 The McLaren Senna isn’t a direct replacement for the McLaren P1, but it promises to be faster round a racetrack. The pursuit of this level of performance has led to sacrifices in practicality and luxury, with the inside of the car stripped back to the essentials. Door handles, window switches and the engine start button have all been moved to the roof, while space behind the car’s carbon-fibre bucket seats is only big enough for two crash helmets.

McLaren has described the new model as the "ultimate track car", which forgoes daily usability to be the "lightest, fastest, most engaging McLaren yet". The Senna’s uncompromising design is clear when you take a look at its gigantic carbon rear wing, which tilts hydraulically to adjust downforce and act as an airbrake. Moveable flaps in the air vents aid cooling, while a huge double diffuser at the rear can grow in height, again to improve downforce. The trio of exhaust pipes sit high on the rear of the car, flush with the bodywork, and direct waste gases towards the rear wing.

McLaren has introduced a new braking system on the Senna, consisting of carbon-ceramic brakes with a new ‘CCMR’ compound for improved performance. The car will be shod with Pirelli P-Zero Trofeo tyres that are road-legal but intended primarily for track use. 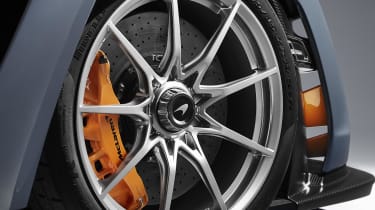 Joining the new car in the Ultimate Series at a later date will be a ‘hyper-GT’ model, currently codenamed BP23. Both cars will be produced in limited numbers – indeed, if you were clearing space in your garage on hearing the news, you’ll be disappointed to learn that all examples of both have already been assigned owners.

Ultimate Series models, like the McLaren P1 and McLaren P1 GTR, represent the pinnacle of the brand’s range, sitting above the Super Series, which currently contains the McLaren 720, and the Sports Series, containing the McLaren 570 and 540.

With its focus on uncompromised performance, McLaren says the Senna is “the purest expression yet of the company’s ‘form follows function’ philosophy”. 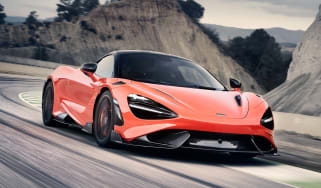 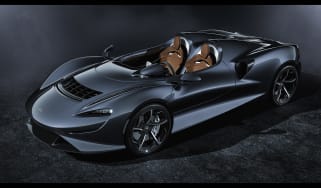