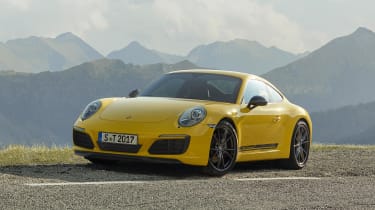 Porsche has expanded the already-extensive 911 range with this – the new 911 Carrera T.Slotting in between the Carrera and Carrera S coupe models, the new car gets a sportier edge thanks to a 20kg reduction in weight, increased performance and some extra standard equipment.

It’s powered by the same 365bhp turbocharged flat-six petrol engine as the Carrera, but gains a shorter-ratio seven-speed gearbox and so manages 0-62mph in 4.5 seconds (a tenth seconds faster than the standard car). A mechanical limited-slip differential is also standard, improving cornering performance. With the optional PDK dual-clutch automatic gearbox fitted, the Carrera T will do 0-62mph in 4.2 seconds. Regardless of which gearbox you go for, a top speed of over 180mph is claimed. 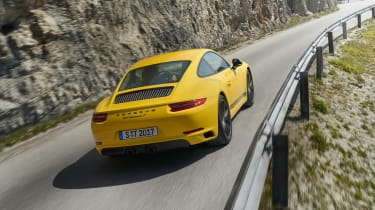 Weight reduction plays a part in the Carrera T’s incrementally improved performance, too: the car’s rear and side windows are made from thinner glass, there’s less sound deadening and Porsche has removed the rear seats. Even the interior door handles have been replaced by loops of fabric and the standard car’s Porsche Communication Management (PCM) infotainment system has been removed in the quest to strip unnecessary weight (although the latter can be added back in at no extra cost).

Standard equipment on the Carrera T includes Porsche’s PASM adaptive suspension system and the desirable Sport Chrono Package, which adds a number of driving modes that can be selected by a steering-wheel-mounted switch to set the suspension, engine and – with the PDK dual-clutch automatic gearbox fitted – gearbox to suit your needs. Dynamic engine mounts and a dash-top chronograph stopwatch are also part of the package.

Porsche has taken time to set the Carrera T apart visually, with reworked bumpers, unique slats on the fold-out rear spoiler and the tips of the standard sports exhaust finished in black. The car gets the same 20-inch alloys as the Carrera S, along with ‘Carrera T’ side graphics and rear badging. 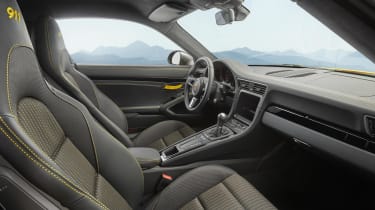 The sportier touches continue inside, where there’s a smaller steering wheel and a shorter lever for the seven-speed manual gearbox. The optional ‘T interior package’ continues the theme, with seatbelts, seat logos, door handle loops and seat fabrics finished in contrasting red, yellow or silver. Black ‘Sport-Tex’ fabric seats with four-way adjustment are standard, while full bucket seats are available as an option for the first time on a Carrera model.