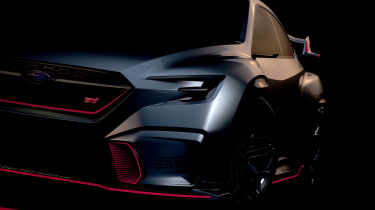 Subaru has released teaser images of a performance-orientated STi version of last year’s VIZIV Performance concept car. The radically-styled concept is set to be unveiled at the Tokyo Auto Salon later this month.

The VIZIV STi will be the seventh Subaru concept to bear the VIZIV name – said to be verbal shorthand for "vision for innovation”. While technical details have not been announced, the images released show that the VIZIV has sprouted spoilers, intakes, splitters, large alloy wheels and flared wheel arches, along with plenty of red detailing and an aggressive front-end treatment. It’s likely that the concept will offer a glimpse of what a new WRX STi production car could look like.

Compared to the most recent Subaru WRX STi, last year’s non-STi VIZIV concept was slightly larger – the distance between front and rear axles was extended to 2,730mm, and width increased to 1,950mm across its wheelarches. Last year’s VIZIV concept retained a 'boxer' engine and four-wheel drive, so it’s likely that the STi version will too. 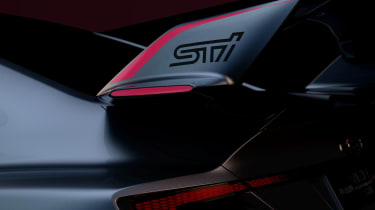 Last year’s concept also previewed Subaru's semi-autonomous driver assistance features, which are expected in 2020. These include an enhanced EyeSight dual-camera assistance system, but there's no word yet on which other Performance Concept features will make it to the showroom.