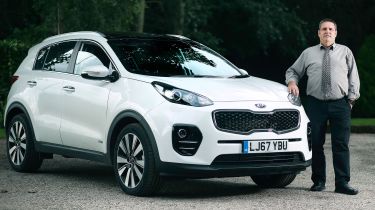 The first few months of owning a new car are often the best because you’re getting to know all about your vehicle. But you can’t do that when it ends up with the dealer for weeks on end due to a mysterious fault. This is what happened to Ian Stephenson of Oakwood, Warrington, in Cheshire, after he purchased a new Kia Sportage 1.6 GT-Line.

“I bought the car on 31 July from local dealer Lookers Kia in Stockport, and on 17 August the car came to a halt,” he said.

Ian had the SUV collected and taken back to the dealer for an inspection. Days went by without a definitive answer and Ian got in touch with us to see what to do.

We encouraged him to wait for the inspection result. After two weeks Ian finally heard back from his dealer. “They told me they think there’s a fault with one or more of the injectors,” he explained. “So far Kia has had the car for longer than I have.”

It took nearly two more weeks before Ian was given some good news from Kia. “I was told I’d get my car back on a Friday,” he said. “The dealer told me that they’d changed the injectors and conducted a 70-mile test drive to ensure it worked.”

But the fix didn’t last. “I drove the car on Saturday and Sunday and it was fine, but on Monday when I started it up it sounded like a bag of spanners. It began misfiring and I had to get the car towed back to the dealer.”

Not pleased that the problem hadn’t been rectified and that he had to take another day off work, Ian contacted Kia’s UK CEO, Paul Philpott, who told him “he’d put his senior customer services people on the case”. At the same time, we chased Kia UK. Ian said he liked the Sportage but wanted to swap out of his problematic one.

Shortly after, a Kia spokeswoman told us: “Kia has looked into the case and it’s disappointing that the car has failed again. The dealer is working with Kia’s technical department to diagnose the cause of the misfire, but in the meantime the dealership (and Kia) have agreed to replace the car. The new one is on order and the customer is being kept mobile in a suitable loan car.”

Ian said: “I understand that new cars can come with faults. It’s just a shame that mine took weeks to sort.”