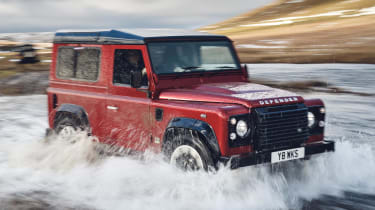 In celebration of Land Rover’s 70th anniversary, the British brand has unveiled a limited-edition, high-performance version of the now-defunct Defender SUV.

Just 150 examples of the Defender Works V8 will be built. Rather than being built from the ground up, Land Rover Classic will select 150 existing cars to be ‘re-engineered’. Each gets a 5.0-litre V8 petrol engine with just under 400bhp (enough for 0-60mph in 5.6 seconds), an eight-speed automatic gearbox, upgraded brakes and reworked suspension. Land Rover claims the new model pays homage to V8-powered models from its history, including the Series III Stage 1 and 50th Anniversary Defender.

On the styling front, the classic Defender look has been updated with a choice of eight body colours that contrast against a black roof, grille, wheelarches and 18-inch alloy wheels; bi-LED headlights and classic Land Rover badging also feature, while the door handles, fuel cap and Defender lettering are all made from machined aluminium. 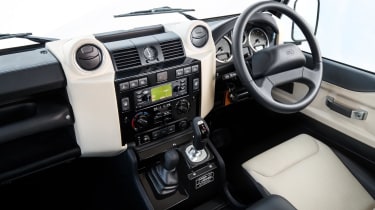 The Defender Works V8 will be available in short-wheelbase 90 and long-wheelbase 110 versions, with prices starting at £150,000 for the smaller of the two. Customers will buy their cars directly from Land Rover Classic.

If you already own a Defender, but can’t afford to splash out on the full Works model, Land Rover Classic has also announced that it'll soon be offering upgrades for Defenders inspired by the new limited-edition car. These include ‘fast-road’ suspension, uprated brake kits and tuning solutions for the final model’s TDCi diesel engine.

The Defender Works V8 is already destined to be a collector’s piece and is likely to help Land Rover take the fight to aftermarket tuners who specialise in similar conversions for its models. Jaguar Land Rover Classic director Tim Hannig said: “The idea of reintroducing a V8 Defender was something we were discussing as far back as 2014, when we were still building the Defender in Solihull. We knew the demand was there for a powerful and fast Defender; the Land Rover authenticity is the ultimate finishing touch for discerning clients purchasing these collector’s edition Defenders.” 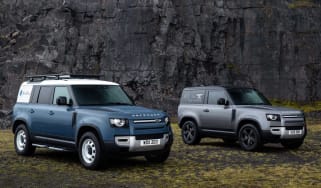 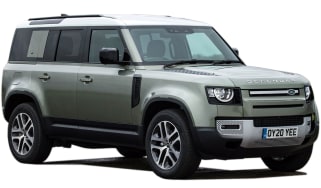