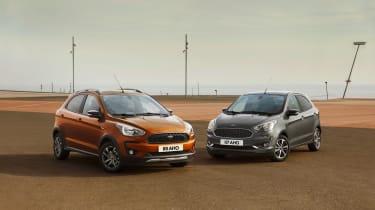 It’s the headline-grabber in a revised range, which sees a diesel engine introduced for the first time, as well as an all-new petrol engine, plus improved technology, including Ford’s SYNC 3 infotainment system.

The Ka+ Active and the rest of the revised models will go on sale later this year. The range now starts at £10,795 – £1,000 more than the current cheapest model.

The Ka+ will be the second Ford to gain an 'Active' trim, following the soon-to-be-launched Fiesta Active. Like that car, it'll have a rugged exterior look, including wheelarch extensions, black trims for the front and rear bumpers and roof rails. 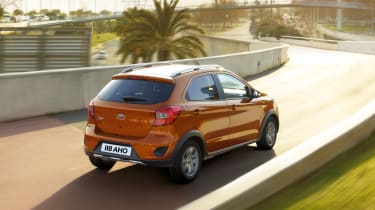 Inside, the Ka+ Active features special fabric designs for the front and rear seats, plus a leather steering wheel with hazel-coloured stitching. It also carries door sill scuff plates embossed with the ‘Active’ legend and has ‘all-weather’ mats for the driver, passenger and boot to protect from muddy boots.

The new Ford Ka+ will see a raft of changes across the range later this year. Exterior changes include restyled front and rear bumpers, a new grille with a chrome surround and swept-back headlamps to bring it in line with other recent new Ford models. The standard front foglamps are framed by an additional chrome strip.

Inside, the Ka+ features a new grained finish on the instrument panel and dark charcoal-coloured trim. There are also a number of chrome trims. 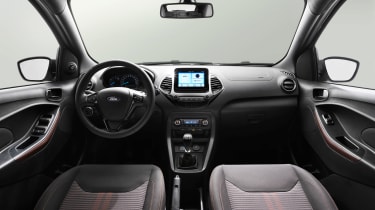 The Ford SYNC 3 infotainment system will be available, although we expect this to be reserved for more expensive trim levels. It allows you to connect a smartphone and access Apple CarPlay and Android Auto through a 6.5-inch colour touchscreen.

As a result of customer feedback, the boot can now be opened using a switch on the tailgate, as well as by using an interior release lever.

The 1.2-litre petrol engine is one of our main criticisms of the current Ford Ka+, but a new version could change that. It’s an all-new 1.2-litre three-cylinder engine, which promises more pulling power for a more responsive drive, as well as an anticipated 4% fuel-efficiency improvement.

Ford also claims the engine will be smoother and quieter in operation, and CO2 emissions of 117g/km are expected – slightly more than the 114g/km emitted by today’s car.

For the first time, the Ka+ will be offered with a diesel engine, too. The 94bhp 1.5-litre TDCi diesel is expected to emit 99g/km of CO2, thanks to technology like regenerative charging, which can charge the battery when the car is coasting or braking. 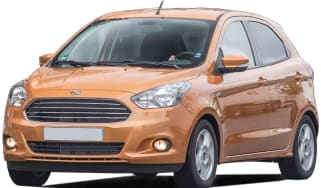