"The Ford Ka+ is practical and handles nicely, but it's let down by a lacklustre engine and poor safety rating"

The Ford Ka+ takes a little bit of explaining, but makes a great deal of sense once you get it. Despite the name, the Ka+ is best thought of as the Fiesta minus. It’s a foot longer than the outgoing Ka, but only 4cm shorter than the seventh-generation Ford Fiesta, a car with which it shares mechanical underpinnings.

The Ka+ is also a little bit taller than the last generation of Fiesta, which translates into noticeably more headroom inside. Depending on your point of view, therefore, the Ka+ either competes with superminis like the Volkswagen Polo and Hyundai i20, or smaller city cars such as the Volkswagen up! and Hyundai i10. 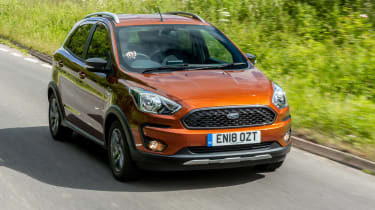 The new Ka+ is only available with a 1.2-litre petrol engine, with either 69 or 84bhp. Whichever you choose, don’t expect lightning-fast performance: the engine is the Ka+’s main weak point. Going from 0-62mph takes 16 seconds with the less powerful engine, while upgrading to the 84bhp version reduces that time by around 2.5 seconds. Fuel economy is poor for a city car, with fuel economy of less than 50mpg. A 1.5-litre TDCI diesel is slightly better, managing up to 56.5mpg, but it also costs around £1,500 more to buy.

We’ve long been fans of the way the Mk7 Fiesta drives, and it’s pleasing to see the Ka+ is just as engaging on the road. Ford hasn’t diluted the driving experience for what – in its eyes – is the Fiesta’s smaller sibling.

The good news continues inside, where the Ka+ makes the best possible use of its compact dimensions. Headroom is a high point and while rear passengers adopt a relatively upright seating position, this ensures legroom is adequate. Long journeys with adults in the rear should be perfectly doable, even though it’s probably kinder to put two, rather than three back there. The 270-litre boot is only about 10% smaller than the Fiesta’s, but it’s a more upright shape, so it doesn’t feel quite as usable. Not bad for a city car by any stretch, though. 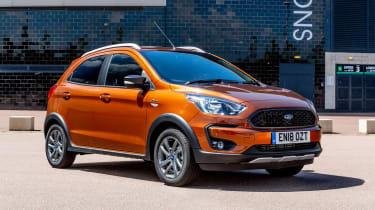 All Ka+s come with air-conditioning, Bluetooth connectivity and front electric windows. Spending an extra £1,000 moves you from Studio to Zetec trim, at which point the more powerful version of the 1.2-litre petrol engine and the diesel become available. Most buyers are expected to plump for Zetec, partly because Studio does without alloy wheels.

A Ka+ Active model was added to the range in the summer of 2018 with the intention of adding some fashionable SUV style to the standard car. Design features of the Active include a raised ride height, protective black plastic body trim, faux skid plates on the front and rear of the car and a pair of roof rails. Naturally, the changes don't turn the Ka+ into a fully fledged SUV, but they do make it more visually appealing.

One black mark against the Ka+ is its below-par three-star Euro NCAP crash-test score. Adult and child occupant protection scores were reasonable, but the Ford was only rated 29% for safety assistance due to a lack of up-to-date active safety systems.

If you're a budget-conscious city car buyer, then the Ka+ makes a practical, appealing choice. If you're able to spend a little more, however, there are rivals such as the Skoda Citigo e iV, SEAT Mii, Volkswagen up! and Renault Twingo that are far more stylish and offer modern, turbocharged three-cylinder engines that put the 1.2-litre in the Ka+ firmly in the shade.

Car insurance can be one of the most costly motoring bills, but you can reduce it by choosing an insurance group one car.
Special edition cars: the best, worst and weirdest 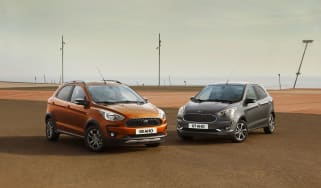