The Ford Ka+ is a small car, so it should be cheap to run, but rivals are more efficient

It’s not uncommon for small cars like the Ford Ka+ to only be offered with a petrol engine, but diesel power is offered here for the time being. The Ka+ doesn’t disgrace itself in terms of running costs, but it’s a shame Ford isn’t offering it with the modern 1.0-litre engine found in the Fiesta, which is about 15% more efficient than the Ka+’s engine. 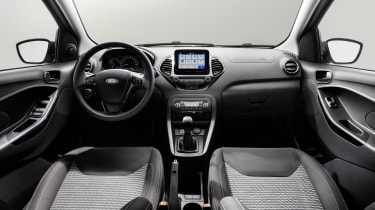 Although it’s available in two power outputs, the 1.2-litre petrol engine fitted to the Ford Ka+ can only manage an unimpressive 48.7mpg, even in its lowest trim, with Active dropping its economy to 43.5mpg. The diesel is slightly more efficient, returning up to 56.5mpg, but it costs considerably more to buy.

While the smaller Ka sits in insurance group three out of 50 and a similarly powerful Ford Fiesta is classified in group 7, the Ka+ Studio gets a group-one rating; premiums will be as cheap as they come. Choosing Zetec trim bumps this up to group two, while the more powerful engine is group five.

Nothing to write home about here: the Ka+ comes with Ford’s standard three-year/60,000-mile warranty. This is the same protection you’ll get with a Volkswagen up!, but if you choose the Hyundai i10 or Hyundai i20, you’ll get five years’ cover with no mileage limit.

It’s probably wise to purchase one of Ford’s fixed-price servicing deals when you buy a Ka+, even though they’re not the most competitively priced offers. A two-year package is £340 for the Ka and Fiesta, while three years is £550. Expect similar costs for the Ka+.