Excellent interior space for a city car, and the Ford Ka+ also has a decent boot

A clever trick carmakers often try to pull off is making small cars feel big, and the Ford Ka+ seems genuinely spacious inside given its exterior dimensions. This is partly thanks to the upright seating position, which discourages you from sprawling your legs out in the back and therefore bashing them against the front seats. 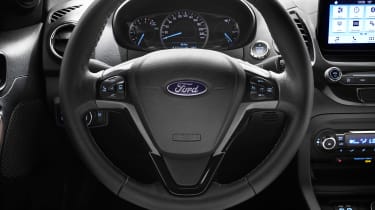 The Ka+’s relatively tall stance (it’s about 7cm higher than a VW Polo) prevents any sense of claustrophobia from creeping in, while the large windows ensure all-round visibility is sound.

How many storage places can you fit into a small car? In fact, how many do you need? Ford boasts there are no fewer than 21 oddment areas in the Ka+, including door bins that’ll take two bottles of water and a hidden cubby on the dashboard edge that can only be accessed with the driver’s door open, making it a good place to store valuables. Front and rear-seat passengers get a pair of cup-holders each.

Ford’s MyFord Dock is a useful feature, too. This smartphone dock rises from the top of the dashboard and will securely hold your mobile, allowing you to charge it and use phone-based navigation on the move without worrying about it sliding around during cornering. 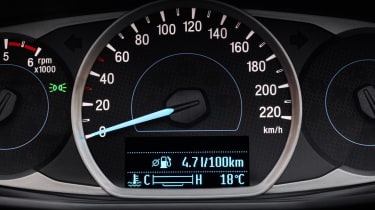 At 270 litres (13 of which are hidden under the floor) the Ka+’s boot is larger than the Skoda Citigo’s, the Hyundai i10’s and the Fiat 500’s. It’s a fairly upright space, so you may have to stack shopping bags on top of each other, but for a city car, this is fairly normal. Standard split-folding rear seats boost practicality further. When they’re dropped, total storage grows to 849 litres.

You’re unlikely to buy a Ka+ with caravanning in mind and only the more powerful version of the engine is capable of towing anything. Its 500kg limit is reasonable, but the engine’s relative lack of power is likely to make pulling even a lightly laden trailer tiresome.