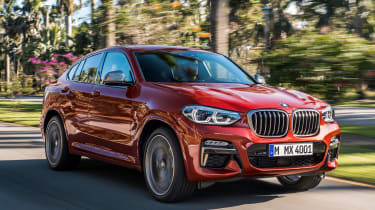 BMW has taken wraps off its reworked X4 SUV, a car that essentially offers a medium-sized version of the company’s popular X6. As before, the X4 combines rakish coupe styling and SUV practicality for a more image-conscious take on on family transport.

Set to square up against the Mercedes GLC Coupe when it goes on sale, the X4 features a thoroughly reworked exterior, a range of modern petrol and diesel engines, up-to-date driver assistance and safety features and an improved interior.

The new BMW X4 is marginally longer (by 81mm) and wider (by 37mm) than the outgoing model, with 54mm added to the car’s wheelbase and a mere 3mm taken from its height. Traditional BMW styling cues include an enlarged version of the ‘kidney’ grille, aggressive headlight detailing and the all-important ‘Hofmeister kink’ rear window detail.

Perhaps the biggest departure from the previous model is at the rear, where there's an all-new design for the car’s tail-lights. Much like its Mercedes rival, BMW has given the X4 wide, slim rear lights that help to accentuate the car’s width and road presence – an important consideration for many buyers in the SUV-coupe market. 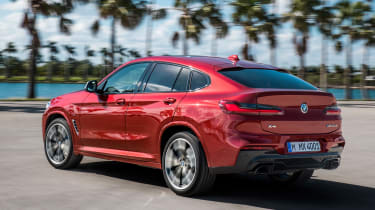 It’s more or less business as usual in the new X4’s interior, which features a logical, modern layout, quality plastics and plenty of leather trim. The dashboard is dominated by a large iDrive infotainment screen, which measures 6.5 inches as standard or 10.25 inches if the optional ‘Navigation System Professional’ is selected.

Each trim level brings its own choice of trim for the seats, dashboard and other appointments, with BMW offering ‘Tacora Red’ Vernasca leather seats as an option exclusively for the X4.

Optional extras are available to maximise comfort, including power-adjustable, heated and/or ventilated seats, three-zone climate control and a panoramic sunroof that’s larger than that found on the previous model. An acoustic glass windscreen is standard and helps cut noise on the move, while the same material can be specified for the front side windows, too. 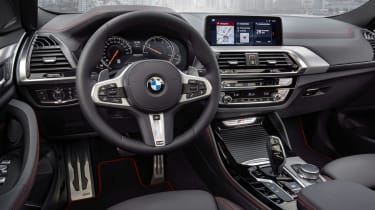 The X4 seats three in the rear with full-size seats, with a claimed 27mm extra legroom over the previous model. These seats can be split 40:20:40 (using buttons in the boot) as standard; doing so will increase the car’s 525-litre boot to 1,430 litres. An optional storage pack brings hooks, compartments and ‘lashing rails’, along with USB and power sockets, to further increase practicality.

The BMW X4 will be available with a range of four and six-cylinder petrol and diesel engines, and all come with xDrive four-wheel drive as standard.

The least powerful is the 2.0-litre four-cylinder petrol in the xDrive20i, which produces 181bhp and pushes the X4 to 62mph from rest in 8.3 seconds. Average economy of up to 51.4mpg is claimed, along with CO2 emissions of between 163 and 168g/km, depending on exact specification. A more powerful version of the same engine is found in the xDrive30i, with 249bhp. The 0-62mph sprint drops to 6.3 seconds, economy only gets as high as 39.2mpg on average and CO2 emissions are as much as 168g/km.

Set to enter production in August 2018, the most powerful petrol engine will be the 3.0-litre, six-cylinder in the M40i model. This performance-orientated model produces 355bhp and manages 0-62mph in 4.8 seconds; economy of up to 31.4mpg and CO2 emissions of up to 213g/km are the trade-off.

Diesels are likely to be the most popular X4 models in the UK and there’s no shortage of choice. The smallest is the 2.0-litre, four-cylinder xDrive20d, with 187bhp and a 0-62mph time of eight seconds exactly. Fuel consumption ranges from 50.4 to 52.3mpg depending on spec, with CO2 emissions of up to 149g/km. A more powerful version of the same engine is fitted in the xDrive25d, with 228bhp and 0-62mph taking 6.8 seconds. Average economy is as high as 51.4mpg, with CO2 emissions ranging between 145 and 149g/km.

Prices have yet to be announced for the new BMW X4, but it’s likely to cost about the same as the outgoing model. That means prices starting just below the £40,000 mark and climbing to £50,000 and above for sportier M models. 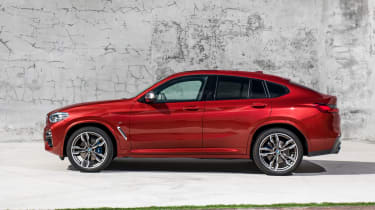 All X4 models come as standard with a good range of active safety kit. A collision and pedestrian warning system and automatic emergency braking is standard, as is cruise control. Optional safety features include active cruise control, which can bring the car to a stop and pull away again in traffic, along with traffic-sign recognition and lane-departure warning systems. Add the optional ‘Driving Assistant Plus’ safety pack and the X4 will benefit from active steering systems that can keep the car in lane at up to 130mph, along with various cross-traffic and cross-wind warning systems.

BMW also offers its ‘Parking Assistant Plus’ pack on the X4, which includes a panoramic parking camera system with top-down and 3D views, as well as helping the you select and park in both parallel spots and bays.

As with most BMW products, the majority of the car’s functions are controlled by the iDrive infotainment system, which features sophisticated connectivity as standard using BMW’s impressive extended range of BMW Connected and ConnectedDrive features.

Apple and Android phones are fully supported, as are their respective smart watches, along with Amazon Alexa and Google Home personal assistants; BMW suggests that a route could be planned via any of these methods before being transferred to your car, based on calendar entries and other information. A SIM card comes as standard, which allows the use of BMW Teleservices in the event of an emergency – with an automatic prompt if a low-speed collision is detected. 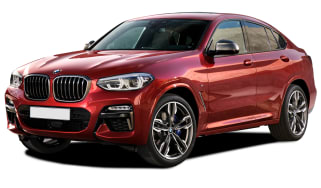