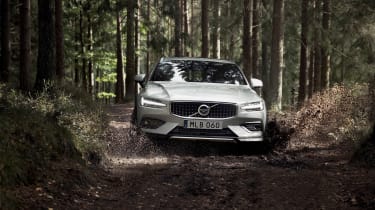 Volvo has announced full specification details for the V60 Cross Country estate, ahead of deliveries in early 2019. Order books are open now, with prices starting at £38,270

The Cross Country name has been a fixture in Volvo price lists for well over a decade, having debuted on the Volvo V70 estate. As the name suggests, the new V60 Cross Country offers a modicum of rough-track capability for those who prefer an estate to an SUV.

To validate its tough off-road looks, the V60 Cross Country has 60mm more ground clearance than the rest of the V60 range, as well as four-wheel drive, hill-descent control and a special off-road driving mode. Only one engine will be offered at launch, Volvo's familiar D4 diesel engine.

The Volvo V60 Cross Country has the same bodywork as the estate it's based on, but extra body cladding lends it a tougher look while affording a little extra protection against the elements. Wheel arch extensions, lower sill mouldings and a rear bumper are all finished in charcoal grey, and the latter bears an embossed Cross Country logo. The same grey finish is seen on the lower grille, while an off-roader stance is created by a 60mm lift in ride height and model-specific 18-inch five-spoke alloy wheels.

As well as the added ground clearance, four-wheel drive, hill descent control and a special off-road driving mode lend the Cross Country the ability to tackle terrain that would be off limits to drivers of the standard Volvo V60. The off-road driving mode comes into its own when negotiating difficult surfaces at below 25mph, where it makes constant adjustments to the four-wheel-drive system, engine, gearbox and accelerator response to ensure easy progress.

With the emphasis squarely on practicality, the V60 Cross Country has front and rear parking sensors, automatic LED headlights with Active High Beam, a powered tailgate and hill start assist as standard. As well as off-road prowess, on-road safety is well catered for. There's autonomous emergency braking (AEB) with the ability to detect and assist in avoiding pedestrians, cyclists or large animals, as well as vehicles in your path. 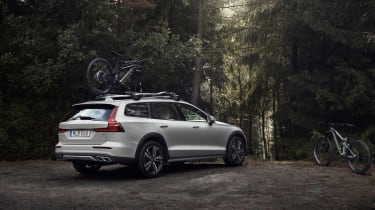 In what Volvo claims is a world first, oncoming collision mitigation is standard, too. It detects vehicles travelling towards you and can apply the brakes automatically in a bid to reduce the severity of a head-on crash.

Although other engines may be launched later on, the V60 Cross Country is only available with Volvo's 187bhp 2.0-litre D4 diesel engine, connected to an eight-speed automatic gearbox. The diesel engine provides impressive pulling power; enough to grant the Cross Country a maximum braked trailer towing capacity of 2,000kg. Volvo claims that 55.4mpg is possible, with CO2 emissions of 135g/km. This places the V60 Cross Country in the 32% Benefit-in-Kind (BiK) bracket for company car users. 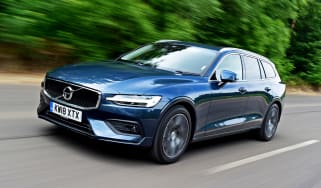