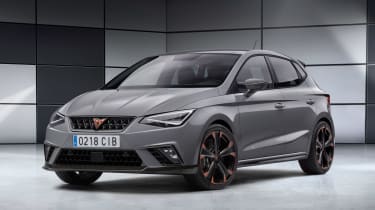 Hot on the heels of the recently revealed Cupra Ateca, SEAT has announced that its new standalone brand could build this performance version of the Ibiza hatchback.

Unveiled at the official launch event for the Cupra brand, the Cupra Ibiza will be a rival to the forthcoming Ford Fiesta ST, if customer reaction is sufficiently positive for production to get the green light. The car seen in pictures is essentially a show car, with development work on the production version still ongoing.

Technical details of the Cupra Ibiza have not been announced, but the car on show at the launch event featured lowered suspension, striking alloy wheels, a large front splitter and a range of gloss and copper-coloured accents. Its engine is expected to produce around 200-220bhp. 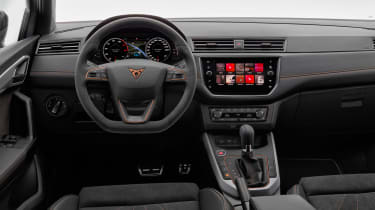 The car’s interior gets a similar treatment to that of the Ateca, namely Alcantara trim, a flat-bottomed steering wheel and sports seats. Carbon fibre-effect trim, SEAT’s familiar infotainment screen and a screen in place of the standard model’s dials also feature.

Should the Cupra Ibiza make it to production, it’s expected to cost around £20,000 and is likely to arrive in 2019. The introduction of a Cupra Arona SUV with the same engine is also a strong possibility.

Carbuyer understands that Cupra models will be available to buy from any SEAT dealer, but only around a fifth of the network will offer a Cupra-specific retail experience, along with ‘Cupra Master’ specialists to assist with sales and servicing.