The emergence of the performance SUV speaks volumes about the increasing popularity of high-riding models among UK buyers, so it’s perhaps no surprise that Cupra, the performance sub-brand of SEAT, chose to launch a sporty version of the Ateca as its first car.

Several manufacturers now offer a performance SUV, with the Cupra Ateca going head to head with rivals such as the Volkswagen T-Roc R and the Audi RS Q3. Entrance into such a popular part of the market has helped Cupra establish its name, with the firm scheduled to add fast versions of the Leon hatchback and estate to its range in late 2020. 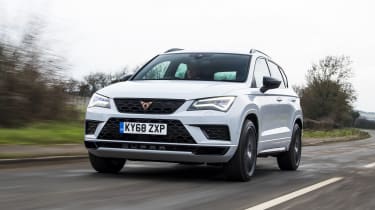 What's more, a genuine high-performance SUV is something of a world-first at this price point – the Skoda Kodiaq vRS is closely related beneath the surface but it’s more economical diesel engine is far less powerful than the Cupra, whose turbocharged, 296bhp 2.0-litre petrol engine enables a 0-62mph time of just 5.2 seconds.

Its 152mph top speed is perhaps less relevant but indicates the considerable potential that lurks under what is quite a discreet and slightly understated appearance. Only a sporty bodykit, model-specific bronze alloy wheels and Cupra badges distinguish it from how the standard SEAT Ateca looks.

Sporty Alcantara suede seats and a Cupra steering wheel badge help to set the mood, but the real difference comes when you find a twisty road. With SEAT’s 4 Drive four-wheel-drive system and five selectable driving modes, the Cupra offers a very different driving experience from behind the wheel compared with a standard Ateca, with a hugely responsive engine, rapid-fire gear changes, and a crackling exhaust.

It manages this without affecting its day-to-day suitability as a family car. If you can forgive 38.1mpg as best-case fuel economy, the Cupra Ateca remains a comfortable, practical five-seater, and its 485-litre boot is only a shade smaller than in a front-wheel drive Ateca. 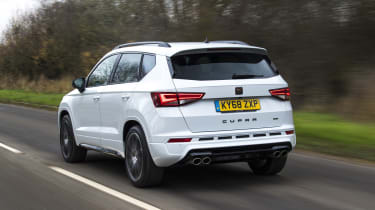 The Cupra Ateca is a very tempting package, as the higher price and slightly increased running costs over the standard model will be justifiable for most given the extra performance and handling prowess. It’s also a far more entertaining car to drive than the diesel-powered Skoda Kodiaq vRS SUV, which is also more expensive.

With a turbocharged 296bhp 2.0-litre petrol engine and distinctly aggressive styling, it's clear that fuel economy wasn't the top priority when the Cupra Ateca was designed. A potential 32.5mpg is claimed but during our time with the car, fuel economy was stuck in the high twenties.

With CO2 emissions of 168g/km, those who choose a Cupra Ateca as their company car will end up with a fairly high Benefit-in-Kind (BiK) tax bill. By comparison, the most powerful petrol model of the standard SEAT Ateca attracts a mid-range BiK banding. 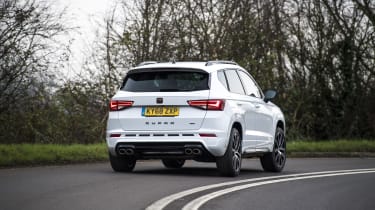 Routine maintenance for the Cupra Ateca should cost little more than the SEAT version, with service intervals that follow the same fixed or variable pattern depending on how many miles you expect to cover per year. Annual servicing is recommended if you cover fewer than 12,000 miles annually, while those who cover a lot of motorway miles and expect to rack up more than that figure in a year's driving might find variable servicing more suitable.

All Cupra Ateca owners can cover their cars under the Cupra Care Premium servicing monthly subscription program. This covers all normal services costs, including technical inspections. Do be aware, though, that the Cupra's high performance tyres and bigger brakes are not covered by this plan, and will be more expensive to replace when worn than those of any other Ateca.

296bhp gives the Cupra Ateca impressive performance, and it's no slouch through the corners

The real headline story, and something that sets the Cupra apart from the more humdrum SEAT Ateca on which it’s based, is the way it accelerates. Thanks to a turbocharged 2.0-litre petrol engine that’s very closely related to the one in the Volkswagen Golf R, the Cupra Ateca is capable of blistering pace, with a 0-62mph time of just 5.2 seconds. This makes it quick enough to outpace popular hot hatchbacks like the Renault Megane RS and the Ford Focus ST.

Keeping the revs between 3,000 and 6,000rpm makes the Cupra feel even quicker than its official figures suggest. Between 40 and 70mph, the explosive pace from the turbocharged engine feels seriously quick. At higher speeds, the engine sounds better thanks to a clever sports exhaust that keeps the car quieter at lower speeds. 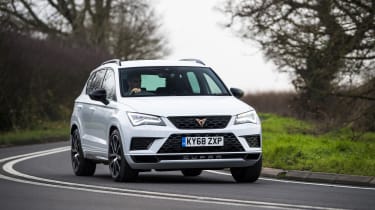 The Cupra proves more than capable of handling a typically twisty British B-road at pace, despite its relatively hefty weight of 1,623kg. Here, you'll enjoy choosing your driving mode from the five on offer, with 'Cupra' the most aggressive. Select it and the suspension dampers become stiffer, the accelerator responds more crisply and the gearbox and steering react more sharply.

This allows the Cupra Ateca to tackle corners with surprisingly little body lean, the price being a firm ride that might not please your passengers. You can individually manage all the parameters that the Cupra mode takes to the max, and can ally the most responsive engine and gearbox modes with a softer ride should you wish to. Meanwhile, the 4Drive four-wheel drive system lends reassurance on damp, greasy or loose surfaces with plenty of usable grip. A dedicated off-road mode is also available for occasional use on moderately rough terrain. 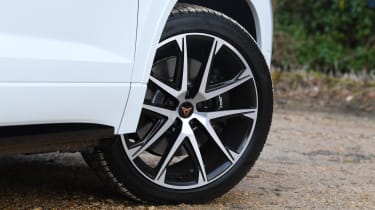 While the Ateca is capable of holding its own on back roads, thanks in part to hugely powerful brakes, it’s not as involving as a traditional hot hatch such as the Volkswagen Golf GTI. The Cupra Ateca feels cumbersome by comparison, with a lack of feel in both the steering and brakes making you feel a little removed from the driving experience.

The Cupra Ateca is a very quick car, particularly considering its SUV dimensions, and the crackling exhaust and sheer pace are exhilarating, but it’s just not engaging enough to match a traditional hot hatch for sheer driving pleasure.

While the Cupra Ateca is sufficiently pumped up on the outside to distance itself from its SEAT-badged stablemates, the relationship is more starkly obvious inside. The architecture is unchanged from the SEAT Ateca, and that's no bad thing in itself – the dashboard is smart, up-to-date and tidily arranged, while the materials in its construction have all the quality we've come to expect from the Volkswagen group. 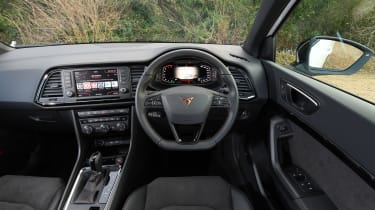 Where the Cupra differs is in its detailing, with contrasting copper stitching and bold Cupra logos on the Alcantara suede sports seats, and a Cupra logo on the boss of the leather steering wheel. As a flagship model, the Cupra Ateca has a long list of standard equipment, including the VW Group's active info display; a driver-configurable digital instrument panel that lets you choose from five different dial displays. There's a simple to use eight-inch touchscreen infotainment system with sat nav, Apple CarPlay and Android Auto. 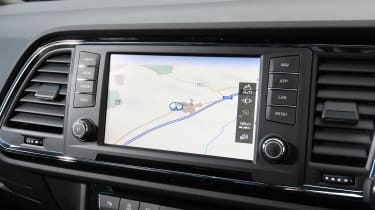 Despite being largely a styling exercise on the standard Ateca interior, the Cupra really does manage to feel genuinely sporty inside, and that speaks volumes about how well SEAT's mid-size SUV is designed.

Sharing as they do a five-door, five-seater body, there's little change from the standard Ateca where the Cupra's versatility is concerned. As mentioned above, the two cars are somehow very different in feel, and a lot of that comes down to the height difference. 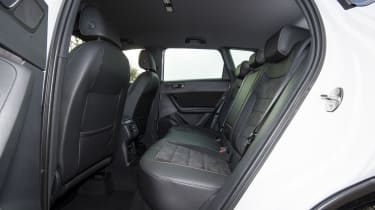 The Cupra's suspension is lowered by 10mm - it's a small amount but it makes a world of difference. Elsewhere, there's little to split the two breeds of Ateca. There's the same generous amount of interior space that allows four to travel in comfort without complaint about legroom or headroom. A child will sit quite comfortably in the centre rear seat, and even adults sitting three abreast won't have their shoulders to badly squashed. 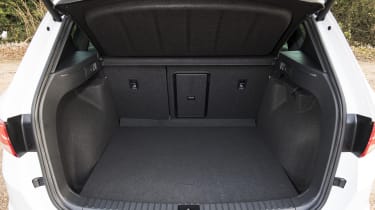 The only area in which the Cupra is compromised as a family workhorse is in boot space, but its slight drop from 510 to 485 litres of luggage room is hardly the end of the world. Four-wheel drive is the reason for this, as the boot floor is slightly higher to make space for a rear differential. Many will say that's a compromise well worth making, as the '4Drive' system is billed as key to the Cupra Ateca driving experience.

Cupra will build on SEAT's reputation for owner satisfaction, while safety seems assured

As a brand that exists in its own right, Cupra is in its infancy, which makes it tricky to predict how its cars will fare in our annual Driver Power owner satisfaction surveys. While it seems obvious to draw comparisons to SEAT – Cupra's parent company – differences in owner expectations between the two brands could make such a judgement irrelevant.

The Cupra Ateca is similar enough to the SEAT Ateca for the latter’s 58th place finish in our 2019 survey to provide reassurance to potential Cupra customers. Ateca owners are very happy with the interior design and comfort of their cars, as well as the infotainment, connectivity and convenience features fitted. Most were impressed by the Ateca's space and practicality, too. 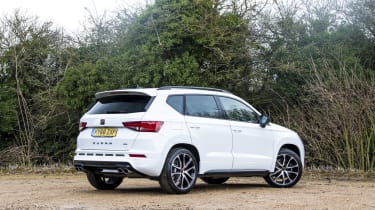 Perhaps most relevant of all to Cupra buyers is the Ateca's strong result in the arena of ride and handling. However, while reliability and quality were praised, a worrying one in five owners reported at least one fault in the first year of ownership.

There should be few concerns over safety. The Ateca holds a EuroNCAP five-star rating after crash testing, including an impressive 93% score for adult occupant protection and 84% for child occupant protection. Autonomous emergency braking (AEB) is standard, and additional crash mitigation technology such as lane keeping assistance is available.

The Cupra Ateca has no direct rivals, but lacks a prestigious image

If you really want to unlock the full potential of the Cupra Ateca, there's an optional Performance Pack that includes even bigger, more powerful brakes from Brembo. Extra supportive seats are also optional, as are gloss-black door mirror housings and special 20-inch alloy wheels.

While the features above are all very tempting, they're unlikely to make a huge difference to your Cupra Ateca ownership experience. Until other marques follow suit, this is currently the only genuinely high-performance SUV you can buy at this price point. The Skoda Kodiaq vRS – arguably the Ateca's closest rival – is diesel powered and nothing like as quick as the Cupra, even if it has the Spanish car soundly beaten on fuel economy. 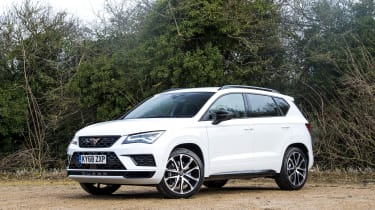 It takes a considerably more expensive Porsche Macan or Audi SQ5 to beat the Ateca's sporty SUV credentials, but consider whether the extra performance is really worth spending significantly more money. It’s also worth bearing in mind that the most powerful 187bhp SEAT Ateca 2.0-litre diesel is far cheaper to buy, much less expensive to run and still a very enjoyable SUV to drive.

There's also the question of image. While many will appreciate the history of the badge, it remains to be seen whether Cupra can garner the prestige of AMG, Audi's S or BMW's M divisions, or whether it'll always be perceived as merely a faster SEAT. 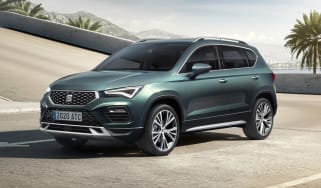 Show me:
Facelifted 2020 Cupra Ateca does 0-62mph in under five seconds 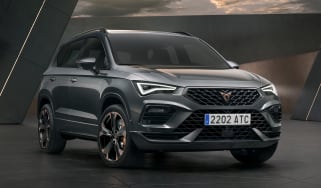 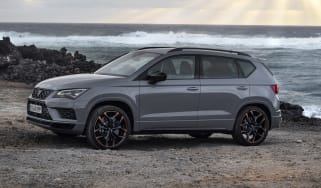 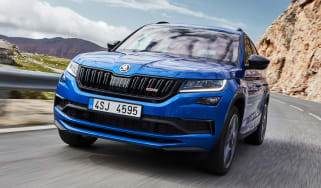