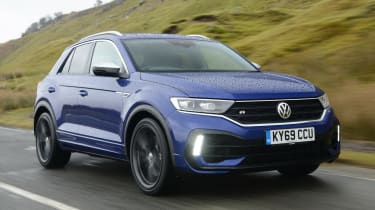 Manufacturers have seen SUV sales soar, so it's no surprise that cars like the Volkswagen T-Roc R are starting to crop up. This is a high-riding model with the performance of a top flight hot hatch, making it a budget Porsche Macan for the masses. It isn't even the first of its kind, going into direct competition with the BMW X2 M35i and Cupra Ateca to satisfy maturing hot hatch clientele.

Practically the definition of a wolf in sheep's clothing, the T-Roc R is a sporty but sensible SUV from the outside, with the throbbing heart and honed chassis of the Golf R sitting beneath it. That means it gets the same 296bhp, grippy four-wheel drive and sizeable brakes as the much-lauded Golf, with acceleration from 0-62mph in 4.8 seconds and a 155mph top speed.

Even more impressive is the fact the T-Roc R feels very close to the lower, lighter car from behind the wheel. Volkswagen has tuned the suspension and four-wheel drive system to compensate for the taller new bodywork, and while it's slightly less agile in the corners, most drivers will never know the difference. Understeer is virtually non-existent, and the T-Roc R feels outrageously fast for such an unassuming car.

The interior gets the expected performance makeover, with bucket front seats, metal pedals and a flat-bottomed steering wheel making an entrance. It's also possible to specify interior trim in Lapiz Blue - the R's signature paint colour - but despite costing over £100, this actually looks a bit cheap. In the UK 19-inch alloy wheels are fitted as standard, while features like a black roof, panoramic sunroof, Beats stereo and sports exhaust allow for some customisation. 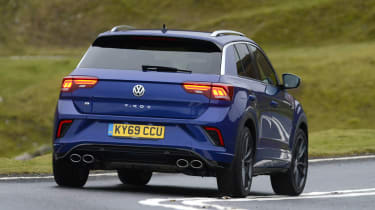 Practicality is maintained, with no reduction in boot space (392 litres) compared with a regular four-wheel drive T-Roc, and plenty of space inside for three passengers and the driver.

There's no denying the world of high-performance SUVs will remain a small niche, but the sacrifice made for choosing a T-Roc R over its hatchback donor is surprisingly small. If you need some more space, this could be the hot hatch replacement you hadn't even considered.

The Volkswagen T-Roc R is competitive for its class, but its price can creep over £40,000

While the T-Roc R's fuel-efficiency of 32.5mpg is rather poor for a small SUV, some will see it as reasonable given the sports car levels of performance on offer. It makes it a little more expensive to run than the Golf R hatchback, which returns up to 40.4mpg. The Volkswagen is also competitive with the BMW X2 M35i, which returns around 35mpg, while its CO2 emissions of 176g/km are also slightly lower than the BMW's 185g/km. 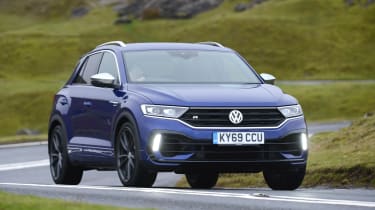 Both of these hot SUVs will be a pricey prospect for company-car drivers, sitting in the top Benefit-in-Kind band. Road tax should be affordable at £145 a year, but be careful with options as it's easy to tip the T-Roc R's price above £40,000, bringing with it a road tax surcharge of £320 for the first five renewal years. Its insurance group is a little higher than the group 29 out of 50 rating of the Golf R; the hot T-Roc sits in group 34.

It might look fairly ordinary, but the T-Roc R can put many sports cars in the shade

The T-Roc R shares its chassis and engine with the Golf R hatchback, and the good news is that despite its SUV shape, the new model is remarkably similar to drive. Volkswagen's engineers have changed the setup slightly, so while the four-wheel drive is predominantly front-biased, it now sends power to the rear wheels slightly more quickly to make up for the T-Roc's 50kg heavier weight and taller stance. 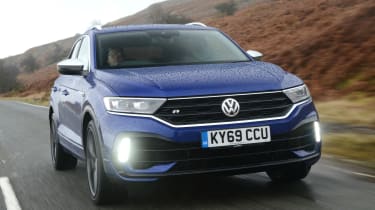 Driven back-to-back it may feel slightly less agile and take a fraction longer to fly out of corners, but the T-Roc R has almost unbreakable grip and traction, with no understeer in normal driving. Its steering is direct and well-weighted too, while the brakes lifted from the Golf R Performance Pack are powerful and fade-free on the road. In its Sport setting, the adjustable suspension's firmness may surprise anyone who's driven a run-of-the-mill T-Roc, but it does mean body control is excellent and there's almost no lean in corners.

With the same 2.0-litre 296bhp turbocharged petrol engine as the Golf R, and a surprisingly small weight gain, the T-Roc R feels just as fast, ripping through the gears in its seven-speed DSG automatic transmission. Acceleration from 0-62mph takes just 4.8 seconds and its top speed is electronically limited to 155mph, with pops and parps from the exhaust during gearshifts that become more noticeable with the optional Akrapovic exhaust fitted. Perhaps as a concession to the less hardcore buyers who are expected to consider this hot SUV, no manual gearbox is offered.

The T-Roc's interior is very similar to the Golf's, so there's a good level of technology and everything is laid out as intuitively as you'd expect. Of course, this being the R model, you also get a set of very figure hugging sports seats, a flat-bottomed steering wheel, metal pedals and a digital instrument display with R-specific graphics. 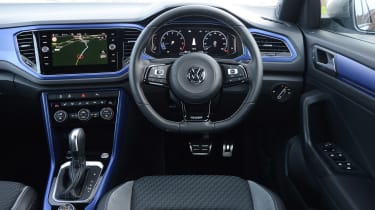 Optional extras are also available, including a Beats stereo upgrade, keyless entry and a panoramic sunroof. You can also improve the engine's soundtrack and shave 7kg off the car's weight with an Akrapovic sports exhaust system, but this is expensive costing an extra £3,000.

We've yet to try a T-Roc R fitted with standard suspension, but given the performance on offer, the £700 Dynamic Chassis Control (DCC) adaptive dampers seem like an option worth choosing. These offer a good compromise between comfort in their softest mode while being firm enough to fulfill the R's sporting brief when you're on a smooth road or track.

Despite its extra muscle there's no sacrifice in practicality

Thanks to its SUV proportions, the T-Roc R is rather practical and should make sense for anyone graduating from a hot hatch, but still after the same driving thrills. There's lots of room in the front seats and enough space in the back for two adults, while getting in and out is also made that bit easier by the car's raised ride height. A slight increase in ground clearance over a hatchback should also prove reassuring if you have to mount a kerb or tackle a rutted track or field. 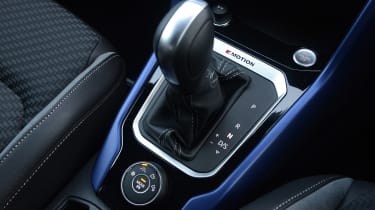 Boot space measures 392 litres, which is somewhat reduced from the 445 litres of standard T-Roc models with front-wheel drive, but matches every other four-wheel drive T-Roc. This is quite a bit smaller than the 470 litres you'll find in the BMW X2 M35i.

While the Volkswagen T-Roc didn't feature in our 2019 Driver Power owner satisfaction survey, the Golf that it's based on came 41st out of the top 100 models. However, even the iconic hatchback wasn't without its faults, with 26.2% of owners telling us they'd experienced at least one fault in the first year, mostly with the electrics. 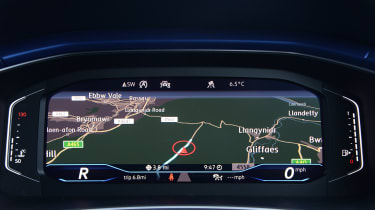 Safety shouldn't be a concern, thanks to a top five-star rating from independent crash-test specialists Euro NCAP. There's also a good chance a collision won't occur in the first place, thanks to standard autonomous emergency braking and adaptive cruise control.