“The Volkswagen T-Roc Cabrio is heavier, less economical and more expensive than the standard T-Roc” 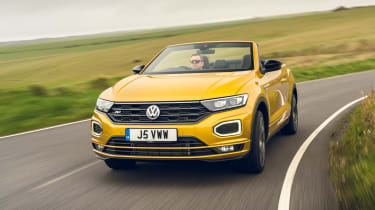 If you were in any doubt about the popularity of SUVs and crossovers, the Volkswagen T-Roc Cabriolet will remove the uncertainty. As you might expect, the Cabrio is a convertible version of the T-Roc SUV, which is a similar size to the Volkswagen Golf and uses the same platform.

It’s Volkswagen’s only convertible currently on sale in the UK and effectively replaces the Volkswagen Beetle and Golf Cabriolet models. VW will hope the T-Roc Cabrio isn’t a niche too far, as it has no direct competitors and the last convertible SUV, the Range Rover Evoque Convertible, was discontinued due to poor sales.

The T-Roc Cabriolet is, however, smaller and, perhaps crucially, cheaper than the soft-top Evoque. It slightly undercuts the BMW 2 Series Convertible and Audi A3 Cabriolet, and the combination of an upmarket badge, SUV body style and a folding fabric roof could prove appealing.

The regular T-Roc SUV will still be the bigger seller and the convertible is available in fewer trim levels as a result. Design, a mid-range model on the standard T-Roc, is the entry-level version here, with R-Line above it. Both trims get adaptive cruise control, two-zone climate control and front and rear parking sensors, plus an eight-inch screen with DAB radio and smartphone mirroring. R-Line adds a sporty body kit, larger alloy wheels, lower suspension, an Active Info Display digital instrument cluster and LED headlights. 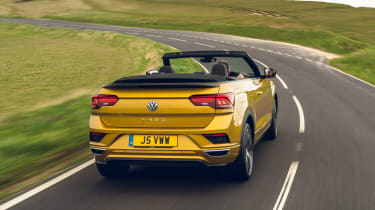 As is often the case with convertibles, the T-Roc Cabrio is noticeably heavier than the car on which it’s based. That’s not good for acceleration, handling or economy; there isn’t a particularly economical version of the T-Roc Cabrio available given that no diesel or hybrid model is offered from launch. You’ve a choice of a 113bhp 1.0-litre or a 148bhp 1.5-litre petrol engine, and we’d recommend the latter as its punchier acceleration better suits the T-Roc’s character. Both offer in the region of 40-44mpg, and the more powerful option is available with either a six-speed manual or a seven-speed DSG automatic.

The T-Roc isn’t the most practical SUV to start with, but its transition to a convertible has really affected versatility. Where the roof mechanism (taken from the Mk6 Golf Cabrio) is placed means the T-Roc Cabrio loses a seat - it’s now a strict four-seater, and those in the back aren’t blessed with acres of leg room either. Instead of a full-size tailgate, the boot opening is more of a postbox slot, and the boot is about a third smaller than the T-Roc’s.

While the loss in practicality won’t bother many buyers, we would still recommend choosing the hard-top SUV if you’re set on the T-Roc. The SUV is a stylish car and one that gives you more scope for personalisation and if you’re after a convertible, it’s hard to ignore the T-Roc Cabrio’s more premium rivals.

It seems that the T-Roc Cabriolet isn’t aimed at higher-mileage drivers, as Volkswagen isn’t offering a diesel engine. You’ve a choice of two petrol engines shared with the T-Roc and other VW Group models; a 113bhp 1.0-litre and a 148bhp 1.5-litre engine with the ability to shut down half its cylinders to save fuel. The 1.0-litre, only offered on Design spec, achieves up to 44.8mpg, while the 1.5-litre on the same spec manages 44.1mpg. It’s worth noting that choosing R-Line spec - or the automatic gearbox - reduces the fuel economy slightly. 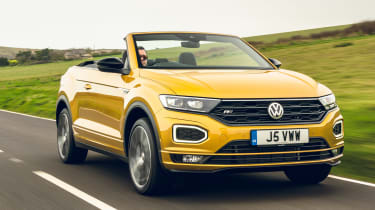 After the first year’s VED (road tax), which is included in the cost of the car, the T-Roc Cabrio will cost £145 a year as long as you keep the price under £40,000. The 1.0-litre engine has the lowest Benefit-in-Kind (BiK) rate for company car drivers. Like every Volkswagen, the T-Roc Cabrio gets a three-year, 60,000-mile warranty but both the BMW 2 Series Convertible and Audi A3 Cabriolet don’t have a mileage cap. Volkswagen also offers buyers a two-year service plan, which can be paid monthly.

Some convertibles, including the Mazda MX-5 and MINI Convertible, pride themselves on their driving experience but we can’t say the same about the T-Roc Cabrio. The T-Roc SUV already has rivals that are better to drive and removing its roof has made matters worse. There’s not much feel in the steering - although it is quite precise - and the extra weight blunts performance. 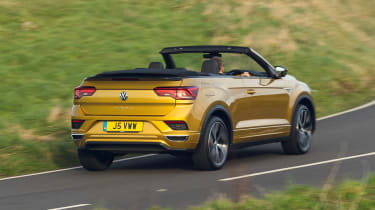 There are just the two petrol engines on offer. You can choose a 1.0-litre three-cylinder engine with 113bhp on the Design spec, but its 11.7-second 0-62mph time isn’t really good enough considering how much money you’re paying. We’d recommend upgrading to the 148bhp 1.5-litre engine because its extra power makes acceleration and overtaking much less of a chore. It’s not what you’d call brisk, though; 0-62mph takes 9.6 seconds, while the same engine in the Volkswagen Golf is over a second quicker.

Roof-down refinement is good in the Volkswagen T-Roc Cabriolet, but we’d like it to feel more upmarket

Convertible cars often let lots of wind noise and buffeting into the cabin but the T-Roc is very good in this respect when you’ve got all four windows up. We don’t think you need to pay for the expensive optional wind deflector (£350) that makes the rear seats inaccessible. There’s none of the rattling you can get in some convertibles, and on the whole build quality is good. But like the regular T-Roc, the materials don’t feel particularly great - especially when top-spec models are approaching £40,000. 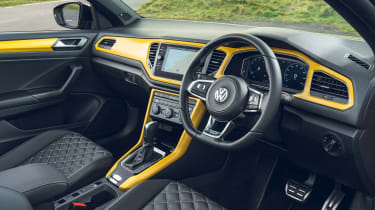 While driving sparkle won’t be the top priority for many buyers, the car’s ride is likely to be more important. Our R-Line test car was never settled and was even uncomfortable at times. It seems to highlight even small bumps, and pounds over manhole covers and potholes. Sadly it’s no better at speed, and the £1,075 adaptive dampers on our car seemed to make little difference. 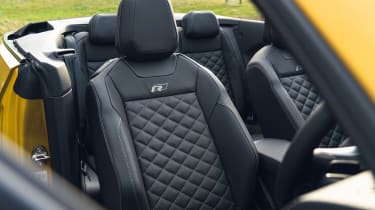 The options list is tempting but you can end up spending much more than the list price. It’s a little disappointing that a reversing camera (£350), heated front seats (£300) and keyless entry (£395) aren’t included even on the top model, while leather upholstery costs over £2,000.

Becoming a convertible means the T-Roc Cabrio is much less practical than the regular T-Roc SUV, which itself isn’t the most versatile car in its class. For a start, the roof mechanism means there’s no room for a middle rear seat, and the two remaining rear seats are pretty cramped. They’ll be fine for kids, or for adults on occasional short journeys, while headroom is slightly compromised by the folding roof. At least the roof only takes nine seconds to lower, at speeds of up to 19mph. 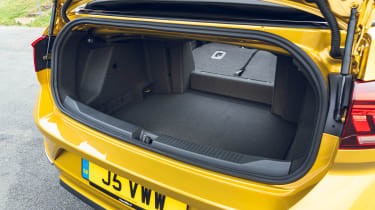 As you might expect, the boot is also much smaller than in the T-Roc SUV. Measuring up to 284 litres, it’s on a par with the BMW 2 Series and Audi A3 convertibles with their roofs down - but both offer around 50 litres more when the roof is up. The T-Roc’s boot is fine for everyday use, but won’t easily accommodate a pushchair, holiday bags or flatpack furniture. Families might struggle to have the T-Roc Cabrio as their only car. The rear seats do fold, so there’s a little more luggage capacity available when you need it. You can tow up to 1,300kg and 1,500kg with the 1.0-litre and 1.5-litre engines respectively, while a towbar costs £745.

The T-Roc Cabrio has tried-and-tested parts

The Volkswagen T-Roc has been on sale for a couple of years now and uses many parts shared with other VW Group cars, so reliability shouldn’t be too much of an issue. The Cabrio’s convertible roof mechanism has seen previous service in an older Volkswagen Golf, too. VW came 17th out of 30 manufacturers in our 2019 Driver Power survey, with a fifth of owners reporting a fault in the first year. 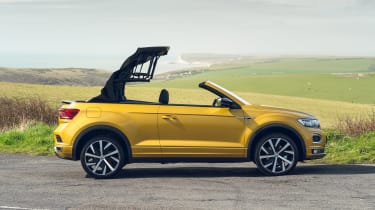 The T-Roc’s five-star Euro NCAP rating applies to the T-Roc Cabrio, even though every panel behind the front wheels is new. Standard safety features include lane-keeping assist, driver fatigue detection, a rollover protection system and auto emergency braking, plus all the usual airbags and traction control.