“Few cars look more striking than the Range Rover Evoque Convertible, but it’s impractical and a lot more expensive than the standard version”

Looking more like a concept car from a motor show than something you can find in a showroom and use every day, the Range Rover Evoque Convertible is a unique proposition in the luxury SUV market. It combines the open-top glamour of a luxury four-seater convertible with the raised driving position, off-road ability and road presence of an SUV. Land Rover’s claims that the Evoque Convertible is the “world’s first luxury convertible SUV” are not exaggerated – short of a Jeep Wrangler or specially converted Mercedes G-Class, there’s nothing in the class that offers such an unusual combination of abilities. As such, buyers are likely to consider everything from an Audi TT Roadster to a Mercedes E-Class Cabriolet as potential rivals.

With the cheapest version costing more than £45,000, it’s easy to write the Convertible off as an expensive toy for those looking to stand out, but there's always a price to pay for exclusivity. And don’t forget, the Convertible loses none of the standard model’s ability off-road – your money is buying a Land Rover that still lives up to its name.

As a luxury vehicle aimed at those with discerning tastes and plenty of cash, it’s no surprise that the Evoque Convertible comes very well equipped in all trim levels. Even entry-level SE Dynamic trim brings eight-way adjustable memory front seats, DAB radio, sat-nav, cruise control and automatic emergency braking, plus countless other features and lashings of leather.

Land Rover has also added its InControl Touch Pro system, which brings sat nav, stereo, bluetooth and climate-control functions together, all controlled by a 10.2-inch touchscreen. 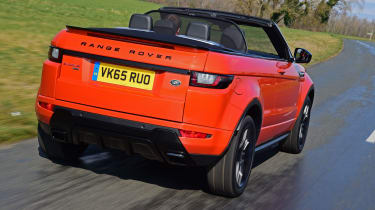 The Evoque Convertible has a fabric roof that can rise in 18 seconds and fold in 21 seconds at the touch of a button. The space required to store the roof means boot capacity is significantly reduced – it’s actually less that of a Ford Fiesta. The roof’s folding mechanism has also reduced the width of the interior towards the rear, meaning the Convertible only has four seats to the regular Evoque’s five.

As long as you’re not cramming the Evoque Convertible with too many people or too much cargo, it’s almost as good as other Evoques on the road. It’s quiet and smooth enough, but the chassis strengthening required as a result of losing the roof adds a great deal of extra weight, which blunts performance and increases running costs.

The standard Range Rover Evoque finished 55th out of the 75 cars ranked in our 2017 Driver Power owner satisfaction survey of cars currently on sale in the UK.

The Evoque Convertible's daring looks certainly won't suit everyone, but some SUV fans may question why it's taken so long for a new off-roader to be offered with a fabric hood. It certainly brings variety to the market, and if you live near the countryside or coast, it could be the perfect way to feel part of the scenery. For a more detailed look at the Range Rover Evoque Convertible, read on for the rest of our in-depth review. 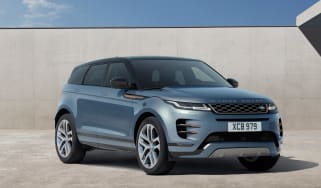 All-new Range Rover Evoque takes on BMW X2 with fresh styling and mechanicals; on sale now with first deliveries in spring 2019
Skip to ContentSkip to Footer