The Evoque Convertible isn’t available with the most economical engine from the three and five-door Evoque. Most buyers will choose the 2.0-litre diesel, badged Td4. With the 178bhp diesel engine in that model, the Evoque Convertible is capable of an official average of 49.6mpg – around 8mpg worse than the fixed-roof versions. Similarly, CO2 emissions climb from 129 to 149g/km.

After the first year’s CO2-weighted payment (generally included in the on-the-road price) all Evoque Convertibles attract road tax of £140 a year, plus an additional surcharge of £310 a year for five years thanks to the car’s £40,000-plus list price. The surcharge applies the first five times you tax the car and brings the total yearly bill during that period to £450. 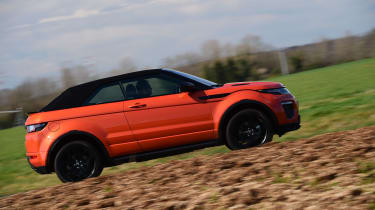 The Td4 Evoque Convertible is in group 41 and the petrol version is likely to be rated similarly, which is slightly higher than the equivalent three or five-door Evoque.

Land Rover offers a three-year/60,000-mile warranty on all its models, which is on par with Audi, but BMW offers an unlimited-mileage policy.

The Range Rover Evoque Convertible’s service interval is set at every 21,000 miles.