The Range Rover Evoque isn’t the roomiest of cars, particularly in sleek three-door coupe guise, and the addition of a soft-top roof limits space even further.

The headline concern about interior space in the Evoque Convertible is that there are only four seats. This is because the space the roof mechanism requires either side of the seats has led Land Rover’s designers to move the outermost seats towards the centre – effectively squeezing out the middle seat.

The doors are wide and heavy, while access to the back seats is quite tight. Once installed, your two rear passengers won’t have much to smile about when it comes to legroom – because there isn’t a great deal once the driver’s seat is in position. Roof-up headroom is reasonable for a car like this, and more or less on par with the three-door Evoque coupe.

It’s better up front, where the steering wheel adjusts in and out as well as up and down, and the driver’s seat is height-adjustable, too. The glovebox is a decent size and the door bins are big enough to pass the Carbuyer ‘big bottle test’.

The second headline concern about the Convertible’s practicality is its boot. Measuring just 251 litres, its luggage space is smaller than either a Ford Fiesta’s or a Porsche Boxster’s. That’s because the Evoque Convertible’s roof mechanism eats into the available space. 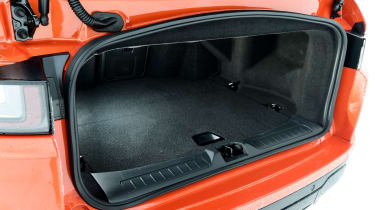 There’s no lip to lift luggage over, although the fact that the Evoque is a high-riding off-roader still means you need to lift your shopping quite high. Plus, the flip-up bootlid can’t be opened if you’ve reversed into a tight parking space. The limitations don’t stop there: the rear seats don’t fold and a ski hatch – allowing longer items to be loaded – is only standard on the HSE Dynamic Lux model (it’s a £215 option on the HSE Dynamic).

Regardless of engine, the Evoque Convertible can tow an unbraked trailer weighing up to 750kg and a braked trailer weighing up to 1,500kg. The detachable tow bar is a £675 option, and a 13-pin power socket costs an additional £284. Once installed, bicycle brackets capable of carrying two or three bikes are available, but these cost upwards of £564.