Despite losing its roof, the Range Rover Evoque Convertible is comfortable and quiet on road and very capable off it.

Often, turning a car into a convertible weakens its chassis, meaning that driving over a bump sends a shimmy throughout the body. Stiffer suspension is sometimes fitted to help cure the problem. Both conspire to make a car less comfortable and composed on the move.

Not so with the Range Rover Evoque Convertible. Additional bracing has been used to stiffen the chassis, but it rides, steers and corners well. There’s a little more body lean when cornering at speed and the suspension is a little stiffer, but the steering provides lots of feedback.

There’s precious little wind noise with the roof up, and even with the roof down, the rear wind deflector does an excellent job of isolating occupants from buffeting. 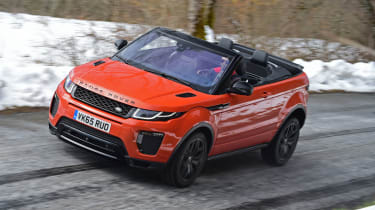 Despite its Beverly Hills looks, the Evoque Convertible is equally adept at tackling wet and muddy hills. All models are fitted with Land Rover’s Terrain Response system, which sets the car up for maximum grip depending on what surface you’re driving on. It can wade through water up to 50cm deep and scale 45-degree slopes. Try doing that in an Audi TT Roadster!

Most Evoque Convertibles will be sold with a 2.0-litre diesel engine. Although a 148bhp version is available in the fixed-roof car, the soft-top is only offered with a 178bhp variant. It’ll do 0-60mph in 9.7 seconds before hitting a top speed of 121mph.

The car is quiet on the move with the roof up – which is more to do with the excellent sound insulation provided by the fabric roof than the engine, as with the roof down, it’s quite noisy.

Performance is adequate rather than exceptional due to the car’s additional weight, but the engine produces its power evenly, meaning it’s easy to drive. Compared to a standard Evoque, it’s noticeable that the nine-speed automatic gearbox kicks down more regularly on twisty roads in order to provide enough power to shift the car’s extra weight.

A 2.0-litre Si4 petrol engine is also available, but is destined to be a niche choice in the UK. It produces 238bhp, which cuts the 0-62mph time to 8.6 seconds and increases the top speed to 130mph.