Range Rover Evoque owners tend to love the way the Evoque drives and performs, but are less bowled over by its reliability and build quality.

The standard Range Rover Evoque was rated poorly for reliability in our 2017 Driver Power owner satisfaction survey of cars currently on sale in the UK. Of the owners who responded, 23.7% reported experiencing a problem with their car at least once. The most common complaint was related to the electrics.

Surprisingly for such a stylish model, owners mark down the exterior, largely because of fit and finish issues. Other problems include practicality and interior build quality, while performance, handling and safety are more highly regarded.

The Convertible is too new to know for sure how reliable it is, but it should be broadly in line with the rest of the range. 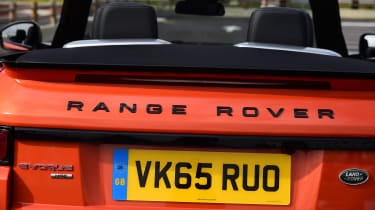 The regular Evoque achieved the full five-star rating in Euro NCAP crash-tests and it’s likely the Convertible will follow suit. It’s worth remembering, though, that the Evoque was tested back in 2011 and the testing procedure has become increasingly stringent since then.

However, the driver and passengers are protected by front, side and driver’s knee airbags, two ISOFIX child-seat mounts in the rear and a pop-up rollover hoop that deploys if the car detects a rollover is imminent.