“The Audi RS Q3 adds a much more powerful engine to the Q3 recipe, which already includes a great interior and a large boot” 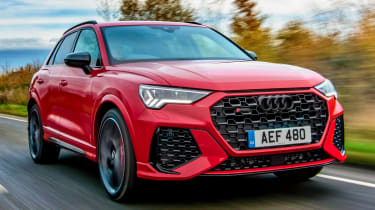 The increased popularity of SUVs generally has led to the rise of the performance SUV, and the choice is now much more broader than it ever has been. At one end there are cars such as the Cupra Ateca and Volkswagen T-Roc R, while the Lamborghini Urus and Bentley Bentayga cater for those with much bigger budgets.

The Audi RS Q3 was one of the first rapid family SUVs, and it’s back for a second installment. It’s a bit more expensive than its Cupra and Volkswagen stablemates (it’s closer in price to top-spec versions of the Porsche Macan) but it’s also quite a bit more powerful and luxurious.

Power stands at 395bhp, which is almost 100bhp more than the SEAT or VW mentioned above can muster. That’s courtesy of a 2.5-litre five-cylinder petrol engine that’s also been used in the Audi RS3, TT RS and the previous RS Q3. The engine may be over a decade old, but it’s had plenty of updates over the years. Stamping on the throttle gets you from 0-62mph in just 4.5 seconds and the RS Q3’s top speed is limited to 155mph.

Of course, the performance on offer results in high running costs, and the RS Q3 will cost a lot to keep on the road - in fuel, tax, insurance and consumables. The fact that it’ll outsprint several sports cars will be more important to those sufficiently keen to buy one, however. 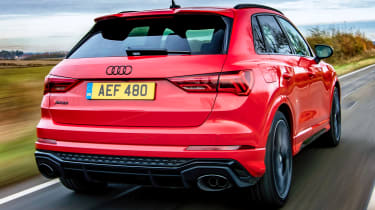 If you want the car to look slightly sportier than the standard RS Q3 SUV, there’s also the RS Q3 Sportback, which has a coupe-influenced roofline. Whichever of the two you go for, three trim levels are available; a ‘base’ model, Audi Sport Edition and Vorsprung versions. These add extra features like bigger wheels, black exterior trim, a panoramic glass sunroof and the RS sports exhaust.

Inside, the cabin is made to feel more special with front bucket seats trimmed in Nappa leather, Audi’s top-spec Virtual Cockpit digital dials and a smattering of RS badges. As is customary with recent RS models, you get two specific driving modes controlled by red steering wheel buttons. There’s plenty of space for passengers and luggage, making it a real alternative to the Audi RS4 Avant if you’ve outgrown the RS3.

It might be worth getting a loyalty card for your local petrol station if you buy an Audi RS Q3, as it’s only slated to manage around 28.5mpg. However, we almost exactly matched that on our test, and it’s about par for the course for an SUV with this much power. CO2 emissions stand at 223-232g/km, depending on the wheel size you choose. The Mercedes-AMG GLC 43 offers 27.7mpg and 234-242g/km, but you’d struggle to notice much of a difference between the two cars in the real world. 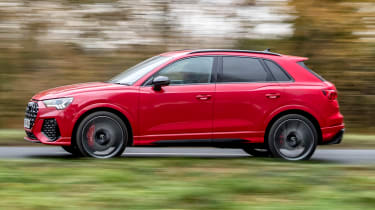 The RS Q3 is unlikely to be many people’s company car, but its CO2 emissions means it’s comfortably in the top band for Benefit-in-Kind (BiK) tax. Because it has a starting price of over £40,000, all owners will pay the higher rate of annual tax (£465) until the car is six years old, and from then it’ll drop to the standard fee of £145.

Audi offers a three-year warranty with the RS Q3, which includes an unlimited mileage cap in the first two years and a 60,000-mile limit in the third year. You can extend the warranty to four years or 75,000 miles, or five years/90,000 miles for extra cost. Your dealer can advise you on the costs, and on the availability of a service plan.

Central to the Audi RS Q3’s appeal is its 2.5-litre turbocharged engine. There aren’t many five-cylinder engines around any more, so it has a bit of an old-school feel. The engine may be ageing - Audi’s used it for over a decade - but it’s had near-constant updates to make sure it’s up to scratch, both in terms of performance and emissions. It produces 395bhp, which is sent to all four wheels via a seven-speed dual-clutch automatic gearbox. 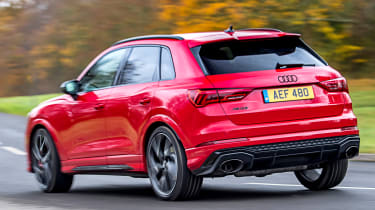 That combination, coupled with a ferocious launch control system, means the RS Q3 rockets up to speed from a standstill. Zero to 62mph is dealt with in 4.5 seconds - nearly half a second quicker than the Mercedes-AMG GLC 43 - and the top speed is limited to 155mph, although you can pay to increase this to 174mph. The engine is the undisputed centre of attention; its performance and theatre both impress.

One fairly recent addition to the engine was a petrol particulate filter, to make sure it passed the latest emissions regulations. Some drivers have said there’s now less engine noise than before, but you can always get around this by speccing the RS sports exhaust system (standard on the Audi Sport Edition and Vorsprung trim levels and optional on the base model). 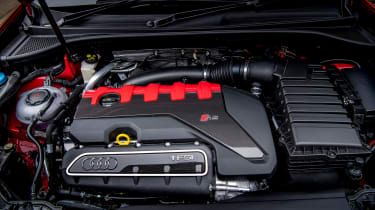 The RS suspension drops the ride height by 10mm compared to the standard Q3, and adaptive damping is also available on the top models. You can alter these, and the settings for the engine and gearbox, by using the red buttons on the steering wheel. Two RS-specific programmes are included, or you can set the car up exactly how you want it. We’d like the steering to be a little less numb, and there aren’t any settings to change this.

The Audi RS Q3 can be very comfortable, and the interior is very plush

Our test car had the optional adaptive dampers fitted and, in Comfort mode, the Audi RS Q3 was very comfortable over broken tarmac. It was surprisingly compliant for such a high-performance car but the ride does get much firmer if you go into the sport settings.

As per the standard Audi Q3, the RS Q3’s interior gets a swish 10.1-inch central touchscreen and a 12.3-inch Virtual Cockpit digital instrument cluster, both with new RS graphics. Even on the ‘standard’ RS Q3, you get very supportive front seats trimmed in fine leather, plus a suede-like covering on the steering wheel and carbon-fibre centre console inserts. Contrast stitching, ambient lighting and RS badges give it a sportier vibe than the regular Q3, but it’s slightly disappointing that some of the cheaper plastics remain in this car, considering it starts at over £50,000. 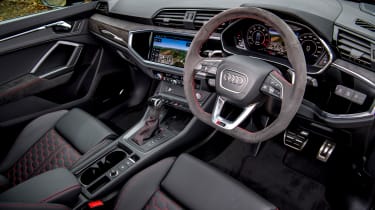 The RS Q3 also gets 20-inch alloy wheels, LED headlights and sat nav. Upgrading to the Audi Sport Edition trim level brings bigger wheels, a black styling pack, a panoramic glass sunroof and a sports exhaust, while top-spec Vorsprung includes carbon-fibre mirror caps, a premium sound system and a driver assistance pack. You can fit some of these options onto the base RS Q3 (the panoramic roof is £1,150, for example), while other options include a rear-view camera for £395, raising the top speed for £1,600 and ceramic brakes. These are a gasp-inducing £4,475 and are only recommended if you’re planning to use the RS Q3 on a track regularly.

Very practical, and the Audi RS Q3 Sportback is barely any less spacious

The Audi RS Q3 is a bit bigger than the previous model, and that helps with interior space. Those in the back have much more space in which to spread out, although the large sports seats may slightly reduce the available space. Still, there should be plenty of room for most passengers, regardless of whether they’re in the front or the rear, and the middle rear seat is okay for short or occasional journeys. 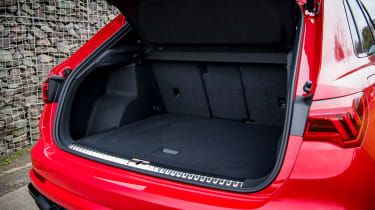 Because of the RS Q3 Sportback’s lower roofline, there’s slightly less headroom in the rear seats but six-footers should be able to get comfortable without their heads brushing the roof. It’s worth noting, however, that the panoramic sunroof is likely to cut into headroom even more.

Both cars have sliding rear seats to increase boot space or legroom, depending on which you want to maximise. Even with the seats pushed as far back as possible, there’s still 530 litres to fill. With the rear seats folded, the Q3 offers 1,525 litres and the Q3 Sportback offers slightly less at 1,400 litres. Should you wish to tow with these cars, the maximum towing capacity is 1,900kg. A folding towbar costs £875.

The five-star Euro NCAP rating given to the Audi Q3 applies to the hot RS models too, so you can be assured that the RS Q3 will be very safe. There’s a huge range of standard safety equipment including pedestrian and cyclist detection, lane-departure warning and traffic sign recognition. The Driver Assistance Pack, standard on Vorsprung models, adds 360-degree cameras, adaptive speed assist and side assist. 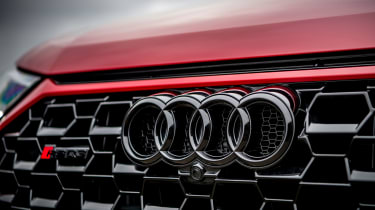 Audi came 16th out of 30 brands in our 2019 Driver Power owner satisfaction survey, which compares well to BMW and Mercedes in 25th and 26th place respectively. Owners didn’t like the high servicing and insurance costs, and 21% of owners reported a fault in the first year. The current Q3 was too new to feature in this list, so we’ll need to see if it performs well in the next couple of years.