The Q2 crossover is a desirable alternative to traditional family hatchbacks 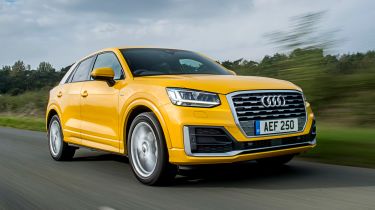 The Audi Q2 is the smallest addition to the German brand's SUV line-up, sitting beneath the Q3, Q5, Q7 and flagship Q8. Only a little larger than a regular hatchback, this fashionable crossover takes on models like the Volvo XC40, BMW X2 and Mercedes GLA, offering stocky looks and a raised seating position, without the elevated running costs.

It's available in SE, Sport, S line and Black Edition trim levels, with the popular S line trim sitting near the top of the range and proving especially popular with UK buyers. That's largely down to its sporty looks, because the S line not only has blacked out door pillars (giving the appearance of a 'floating' roof), but 18-inch alloy wheels, model-specific bumpers, LED headlights and 'dynamic' rear indicators that sweep in the direction you want to turn.

Changes aren't limited to the outside, and a plethora of S line badges mean there's no mistaking the interior for a lower trim in the Q2 range. Figure-hugging part-leather sports seats, a three-spoke steering wheel and ambient LED lighting set the tone, as does black headlining and illuminated door sill trims. 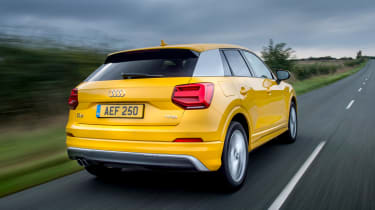 The Q2 is available with a wide range of engines in S line trim, including three petrols and two diesels, with a choice of six-speed manual or seven-speed dual-clutch gearboxes in most cases. The entry-level 1.0-litre TFSI might sound like one to avoid, but it's actually an enthusiastic three-cylinder that's perfect for urban driving and the occasional motorway jaunt. It has 114bhp and returns 53.3mpg, while a 25% Benefit-in-Kind (BiK) band makes it well suited to company-car drivers.

For extra performance, the larger 1.4-litre TFSI with 148bhp offers 0-62mph acceleration in just 8.5 seconds. Thanks to clever cylinder deactivation technology, which turns off part of the engine when it isn't needed, it can also return 49.6mpg, making it more economical than the 44.8mpg 2.0-litre petrol with 187bhp and quattro four-wheel drive.

If you plan on covering lots of miles, the 1.6 or 2.0-litre TDI diesels are also worth considering, with fuel-efficiency ranging from 57.6 to 61.4mpg. BiK bands are slightly higher, though, spanning from 28% to 30% with the 18-inch wheels of the S line trim fitted.

Once you've chosen the engine that suits you best, there's also myriad options to consider - this is an Audi after all. These include everything from a one-off paint colour of your choosing (£2,400) to adaptive suspension (around £600), a panoramic sunroof and option packs. These bundles include the Technology Pack, bringing Audi's digital Virtual Cockpit instruments, MMI Navigation Plus, wireless smartphone charging and a 36-month online services subscription. Audi's Comfort and Sound Pack adds a Bang & Olufsen stereo, front and rear parking sensors and heated front seats, while the Driver Assistance pack enables semi-autonomous driving in traffic jams (with an automatic gearbox fitted).

The Audi Q2's chunky styling might not be to everyone's taste but it looks best in S line guise, and the interior is one of the best in the crossover class. There's no shortage of desirable technology, including the responsive, punchy and efficient engines.