"The Audi Q3 S line has loads of equipment and some sporty touches." 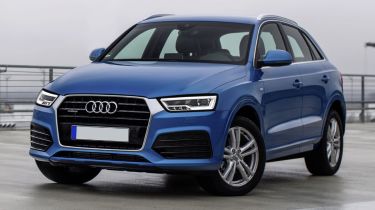 The Audi Q3 S line is the mid-range trim of the German brand's smallest crossover SUV. Just like almost all other models in Audi's range, the S line trim is designed to bring some of Audi's sporting pedigree to everyday models. Its rivals include the BMW X1 M Sport and the Range Rover Evoque SE Tech.

The S line trim has automatic climate control, part-leather seats and DAB radio, along with alloy wheels, electric folding and heated door mirrors and cruise control as standard too. A stand-out feature is the powered tailgate, where drivers can gain access to the boot through the key fob and close it via a button on the bottom edge. The standard equipment can be supplemented by a vast (and expensive) options lst, so buyers should be careful not to over-spec their car.

The Audi Q3 can be connected to one of two petrol engines or one of two power variants of the 2.0-litre TDI diesel. The most economical engine is the 148bhp diesel, which is capable of up to 60mpg, while emissions of 133g/km mean road tax of £130 per year. The small 1.4-litre TFSI petrol has cylinder deactivation technology, which helps to cut fuel economy and produces up to 49.6mpg. It's not as much as the economical diesel, but manages to imprive emissions by 2g/km. S-tronic automatic gearbox and the quattro four-wheel-drive system will marginally harm fuel efficiency if equipped.

Audi models are well known for their solid interiors and the Q3 is no different. Everything you touch is very robust and the brand scores well for build quality and reliability in the 2015 Driver Power survey.The Audi Q3 S line is less expensive to buy than the equivalent Range Rover Evoque and still comes with a lot of standard equipment. Resale values for Q3 models are strong too.Audi's standing as a desirable brand comes across with the Q3 ans the S line trim transfers some sporting pedigree over to the compact crossover.

Although the engines are relatively economical, the lower-powered two-wheel-drive 2.0-litre TDI is outdone by the BMW X1 sDrive18i by a considerable margin of around eight extra mpg.The S line trim does try to inject some sporty design features into the Q3, but the small SUV doesn't have looks on its side. Despite the recent facelift, the Q3 still looks rather bland compared to a Range Rover Evoque.Audi's options list is a minefield of extra costs. The Technology Package, which throws in sat nav and a 20GB storage space for your music is around £1,500 extra, making it hard to recommend. It makes us wonder if it's better to go for the S line plus, which has this pack as standard along with bigger alloy wheels and the Comfort Package for around £2,500 more over the S line.

Carbuyer's pick would be the 148bhp 2.0-litre TDI diesel with a manual gearbox. This engine is the most economical variant in the range, and still delivers a decent amount of power too.