"The Kodiaq vRS is fast, but struggles to justify its price and sporty badge"

The Volkswagen Group, whose member companies include Volkswagen, Skoda, Audi and SEAT, has really shown its confidence in creating new market niches in recent years. In 2018, the non-premium high-performance SUV was one of its big new ideas, with a range-topping version of the SEAT Ateca spun off under a new, separate brand as the Cupra Ateca. And now, Skoda is getting in on the act with a sporty SUV of its own.

Putting the much-respected vRS badge on Skoda's biggest family SUV is a bold step; it's hard not to be cynical about whether the Skoda Kodiaq vRS truly deserves the initials that have seen so many enthusiastic drivers become converts to the Czech brand. As if to demonstrate the sporty SUV's worth, Skoda used it to set a new seven-seat SUV lap record of the famous Nurburgring race circuit in Germany. The upshot: the vRS is definitely fast, and it certainly seats seven. But is that enough to make it a must-buy SUV for those who really enjoy driving? 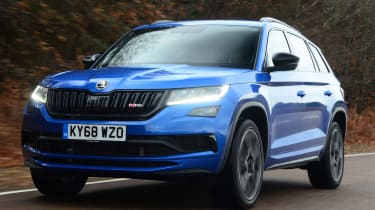 On the face of it, the Kodiaq vRS certainly looks like it has the answers. It stands tall with a more muscular look than lesser models, thanks to its reprofiled front and rear bumpers and the choice of black detailing in place of chrome trim. It also sits on a set of eye-catching 20-inch alloy wheels and generally looks like it means business.

That business is speed: its twin-turbocharged 2.0-litre diesel engine produces 236bhp and gets the car from 0-62mph in just seven seconds. It's only main rival in the field – the Cupra Ateca – trounces the Skoda with a 5.2 second time thanks to its 296bhp 2.0-litre petrol engine. What's more, although the Cupra can't quite manage 40mpg, the Skoda's less powerful diesel engine has no real economy advantage.

Still, speed isn't everything, and the vRS badge has always featured on Skodas that do well when the roads get twisty. In fact, with a clever dynamic chassis control system fitted as standard, the Kodiaq vRS does feel more nimble and sure-footed on a challenging country lane than any other version of the brand's biggest SUV. It can't work miracles, though, and the seven-seater's considerable bulk still takes the edge off its driver appeal. This is not a vRS that'll have enthusiastic drivers itching to leave the motorway in favour of back roads, and the 187bhp diesel model of the Kodiaq doesn’t feel vastly slower. 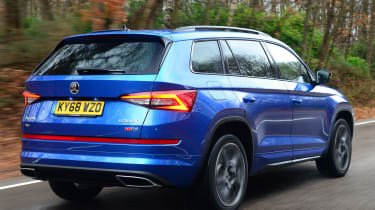 And that's rather a shame. For those who want a faster, more enjoyable version of Skoda's family SUV without missing out on practicality, the vRS certainly ticks the right boxes. However, it's questionable whether the performance increase it offers over the. Skoda Kodiaq SportLine is really worth the extra money, even if you really do need to carry six passengers around a race circuit as quickly as possible.

With a price that puts the Kodiaq vRS against such premium rivals as the Land Rover Discovery Sport, BMW X3 and Mercedes GLC, you'll need to be a big fan to justify choosing the sporty Skoda SUV. With only 300 examples coming to the UK in 2019, it's clear that Skoda recognises just how narrow this niche really is.

While the Kodiaq vRS' Cupra Ateca rival is petrol powered, the Skoda relies on a diesel engine. Many will praise this decision – even though it's faster than a regular Kodiaq, it's still a sensible car and it's nice to know that fuel economy hasn't been forgotten.

However, all its extra power is bound to have an effect, and while the 148bhp Kodiaq – itself no slouch – promises up to 44.8mpg, the vRS can only return up to 35.3mpg according to the latest WLTP testing. CO2 emissions of 167g/km place the Kodiaq vRS in the highest 37% bracket for Benefit-in-Kind (BiK) company car tax, too. 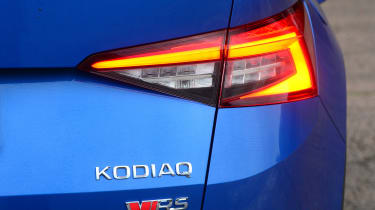 It's worth noting that the petrol powered Cupra Ateca is claimed to return up to 34mpg, which means it's a little thirstier on fuel, but avoids Real Driving Emissions 2 (RDE2) penalties levied against diesels and so occupies a lower 34% BiK bracket.

With a list price of comfortably over £40,000, Kodiaq vRS buyers will face a £310 annual surcharge on the first five occasions that annual road tax renewal is due. This brings the total to £450, which drops to £140 after year six of ownership.

Speaking of ownership: routine maintenance for a vRS is likely to be priced similarly to any other diesel powered Kodiaq. However, consumable items such as tyres and brake materials are larger – and will be more expensive – for the vRS than for its less performance-oriented stablemates.

In order to really justify the steep price that Skoda asks for the Kodiaq vRS, it needs to offer a substantially upgraded driving experience compared to the somewhat less expensive Skoda Kodiaq Sportline. The latter makes no particular claims of high performance, but certainly looks the part with black details in place of chrome exterior trim, body coloured body sills and chrome exhaust pipes. In fact, take into account the SportLine's 20-inch wheels – the same size as those fitted to the vRS – and only an expert will easily tell the two cars apart.

It's rather a shame, then, that the similarities continue from behind the wheel. Both cars sound virtually identical when you thumb the starter button, and both feel the same when driven at moderate speed. Put your foot hard down and you'll notice the extra acceleration granted by the vRS' twin-turbocharged 2.0-litre diesel engine – it delivers 236bhp compared to 187bhp from the most powerful SportLine. That's enough for a 7.0 second 0-62mph time. 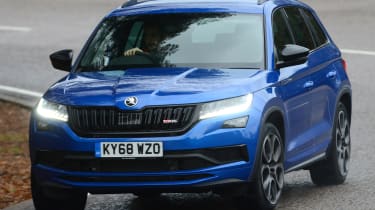 Teamed with a mandatory seven-speed dual-clutch DSG gearbox (which feels a little sharper and more responsive in the vRS than in the SportLine), and the powerful diesel engine provides a feeling of effortlessness that sets it aside from regular Kodiaq models. However, the gulf isn't as wide as you might hope, and the vRS never feels remotely exciting – despite the best efforts of a system called Dynamic Sound Boost that attempts to create a more invigorating exhaust note.

Should you fancy attacking a series of corners, select the standard Dynamic Chassis Control system to 'Sport' mode. This makes the suspension noticeably firmer, with the effect of further reducing body lean. It does make the vRS a more nimble feeling car than the Kodiaq SportLine, but it still feels like the large SUV it is. With little feeling of involvement through the steering – despite the vRS having a progressive setup that adds weight to the steering as speed increases – neither model would be our first choice for a spirited drive.

The Skoda Kodiaq vRS has the same well designed, high quality interior as the standard car

As mentioned above, the less powerful Kodiaq SportLine is something of a thorn in the vRS's side. While the Kodiaq vRS is set apart by more aggressively shaped bumpers, blacked-out window surrounds and mirror caps and, of course, that all-important vRS badge, it still sits at the same height and doesn't look a world removed from its less extrovert stablemate. 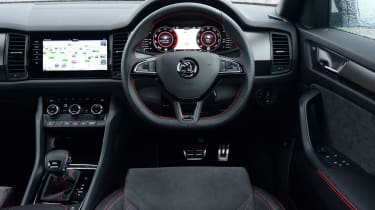 It feels a bit more special inside, though – while the SportLine has upholstery in Alcantara, the vRS is distinguished by its leather sections and red stitching. Both models have the Kodiaq's top 9.2-inch 'Columbus' infotainment system, multi-colour LED interior lighting, heated front seats with electric adjustment and memory for the driver, and the vRS adds a Virtual Cockpit digital instrument panel. Both the SportLine and vRS are available only in seven-seat format.

It's understood that the Kodiaq vRS will only be offered with seven seats in the UK. Perhaps this decision was made to emphasise the car's Nurburgring lap speed record for a seven-seat car – certainly, right now, there's no faster machine in which to carry six passengers.

When it comes to versatility, the vRS makes no compromises over any other model in the Kodiaq range. With every seat in use, there’s still 230 litres of boot space on offer, which is a similar figure to that of a typical supermini. If you need more than that, dropping the third row of seats frees up a total of 715 litres, and you can fold the second row if you need to carry something really bulky – in this mode there's a massive 1,950 litres of luggage space available. 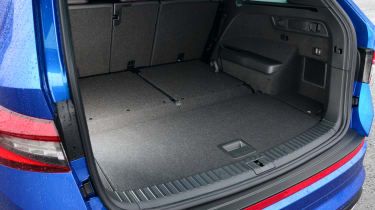 All but the largest families will be tempted to keep the third row of seats folded down, allowing for a boot as big as most will need, yet reserving the option of creating two more seats if needed. Restricted headroom makes the third row a little uncomfortable for adults, although legroom can be generous if the second row occupants kindly slide their seats forward a little.

In common with other Skoda models, 'simply clever' thinking can be seen throughout the Kodiaq, from the little door edge protectors that deploy when the doors are opened, to the cupholders that hold drinks firmly in place. Overall, the fact that the high-performance vRS is just as flexible in daily use as its less powerful sisters stands very much in its favour.

Skoda has a great reputation for owner satisfaction, and safety isn't in doubt

When it comes to owner satisfaction, Skoda has proven something of a force to be reckoned with in recent years. Back in 2017, the Czech brand managed a second-place finish in our annual Driver Power survey. While 2018 saw Skoda drop to 6th place (out of 26 manufacturers ranked), that's still a very strong result for a brand for which value and practicality is key to its product offer.

Among impressive scores tallied up, Skoda returned one of the highest overall reliability scores in our entire survey, with just 8.8% of owners reporting any faults during the first year of ownership. Owners also praised Skoda's interior design and comfort, practicality and infotainment systems, while engines and gearboxes also came in for positive comments. Among the few areas in which the brand failed to shine were handling and driving excitement. 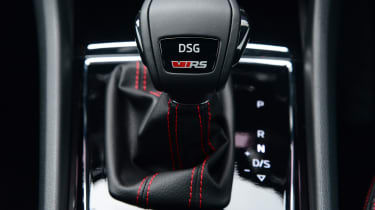 Safety, meanwhile, is a real Kodiaq strong suit – the SUV was awarded the highest five-star rating by independent crash safety expert body Euro NCAP when it faced rigorous tests in 2017. Adult occupant protection was given a 92% score, and – while its 77% score for child occupant protection is rather lower – it's still a decent result.

Every Kodiaq features autonomous emergency braking (AEB) system and a 'care connect' feature that automatically contacts the emergency services when an airbag is deployed in a collision. You can add lane keeping assist, adaptive cruise control, blind spot detection and traffic sign recognition, as well as high-beam assist.

The Kodiaq vRS starts from around £42,000, which puts it amongst some challenging company. The options offered are along the same lines as those that Kodiaq Edition and L&K buyers can choose. Niceties such as three-zone climate control, a heated steering wheel, rear passenger compartment roller blinds and a remote control boot release are bound to be offered so you can customise a Kodiaq vRS to your requirements. 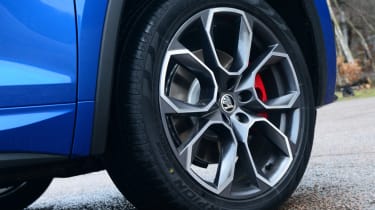 But should you choose one in the first place? On the one hand, there aren't many high-performance seven seaters, which puts the Kodiaq vRS in the spotlight if that happens to be what you need. The similarly priced Cupra Ateca is a strict five-seater, and there's no Nissan X-Trail or Kia Sorento that comes close to matching the Skoda's performance.

If you don't really need seven seats in a fast SUV, though, your options are rather more diverse. A Mercedes GLC such as the 250 d, which is almost a match for the Skoda for speed, has a great image and high-quality appointments – as do its BMW X3 and Audi Q3 rivals.

However tempting these alternatives are, though, we reckon the vRS will suffer more from the rivalry of its own Kodiaq SportLine sister, which – when fitted with the 187bhp 2.0-litre diesel engine – offers a driving experience that's similar enough to make the Kodiaq vRS' £5,000 premium seem a bit excessive.