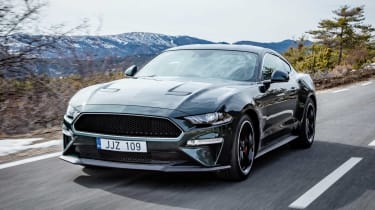 Ford has confirmed the film-inspired Ford Mustang Bullitt will be sold in limited numbers in the UK until June 2019, costing from £47,145. That's a £5,400 increase over the GT model.

The special-edition car, revealed at the Geneva Motor Show in March, is an homage to the iconic Mustang GT fastback from Bullitt and celebrates the 50th anniversary of the Steve McQueen film.

Read our review of the 2018 Ford Mustang coupe

The Mustang Bullitt is available in Shadow Black and Dark Highland Green – similar to the car used in the 1968 film – and is fitted with period-style 19-inch Torq Thrust alloy wheels, a black front grille and a ‘faux Bullitt’ fuel-filler cap. The gloss-black wheels sit in front of large six-piston brakes from Italian specialist Brembo, painted bright red.

It’s powered by a tuned version of the Mustang’s 5.0-litre V8 engine. With a new induction system and revised software, the Bullitt sees power increase from 410 to 457bhp, expected to cut the car’s 0-62mph to around 4.5 seconds. A new rev-matching feature will ‘blip’ the throttle for smoother downshifts, and an active exhaust system will increase the volume of the big V8 engine at the touch of a button. 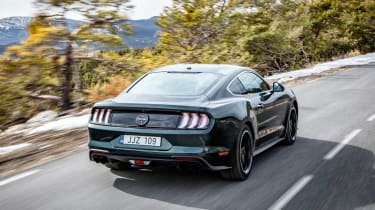 Inside, the Bullitt features a 12-inch digital instrument display, Recaro sports seats with stitching reflecting the body paint colour, a white ‘golf-ball’ gearknob and a 12-speaker, 1,000-watt B&O Play stereo. Each car will have a numbered plaque on the dashboard in place of the Mustang emblem.

Leather seats are among the available options, as well as an adaptive ‘MagneRide’ adjustable suspension system.

Darrell Behmer, the Mustang’s chief designer, said: “This new Bullitt is, as Steve McQueen was, effortlessly cool. As a designer, it’s my favourite Mustang – devoid of stripes, spoilers and badges. It doesn’t need to scream about anything – it’s just cool.”

Fans will get their first chance to see the Ford Mustang Bullitt in the UK at the American Speedfest car show at the Brands Hatch circuit in Kent on 9-10 June.

The original Mustang Fastback from Bullitt came second in a Carbuyer poll of the best movie cars ever earlier in the year – click here to see which car beat it to the top spot. 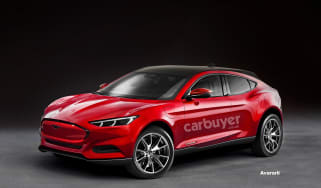