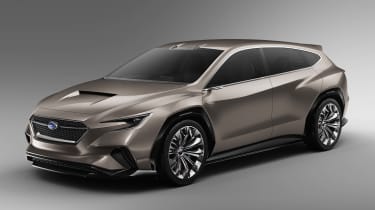 Subaru has unveiled this eye-catching VIZIV Tourer concept at the Geneva Motor Show, sparking speculation that a new Subaru WRX estate could be on the cards.

Subaru has previously teased a potential new WRX saloon with the VIZIV Performance STi concept, revealed at the Tokyo Auto Salon in January. The VIZIV Tourer in these images has similar proportions and suggests the next Subaru WRX might be offered as a load-lugger, too.

The VIZIV name, which is said to signify "vision for innovation”, has now been used on seven Subaru concepts, showcasing the brand's latest technology. The Tourer boasts the latest 'EyeSight' driver-assistance technology, designed to reduce driver fatigue, teamed with radar and sat nav to further improve safety. 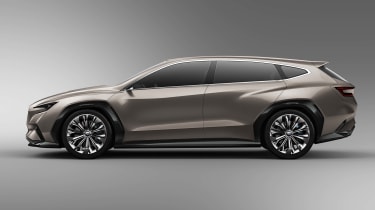 As with the Performance STi concept, the Tourer uses Subaru's favoured 'boxer' four-cylinder engine configuration, allied to a 'symmetrical' four-wheel-drive system. At 4.7 metres long, it's close to the Subaru Forester estate in size, which hints that the next generation of WRX will be kept separate from the next generation of Subaru Impreza. Both models are expected to use the brand's Global Platform.

It has yet to be confirmed whether any of the future WRX models previewed by the VIZIV concepts will make it UK showrooms, though. Subaru's product strategy for Europe is currently focused on SUVs, so introducing a sporty, high-performance saloon or estate might not fit with its plans.