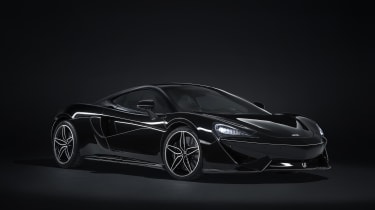 Initially released back in 2016, the McLaren 570GT is the most luxurious and road-biased McLaren ever released. Now, there’s a new edition created with help from McLaren’s Special Operations (MSO) division. Mechanically, this ‘Black Collection’ 570GT sports the same 562bhp, 3.8-litre, twin-turbocharged V8 as the standard car, but added performance isn’t what it’s about.

Instead, it’s designed to showcase the capabilities of the MSO division, which can personalise any McLaren to a buyer's exact taste. The 570GT MSO Black Collection features a deep, black paint specifically developed for the car by the MSO team, called Carbon Black. Further exterior modifications include side skirts, air intakes, front and rear splitters, brake calipers and five twin-spoke diamond-cut wheels, all finished in the same striking black paint shade. 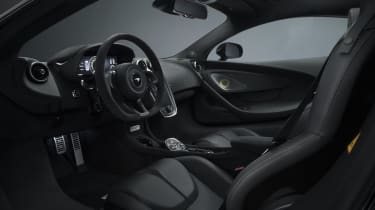 As you’d expect, the enhancements continue inside, with what McLaren calls ‘MSO Black Collection Trim’. This includes a mixture of Jet Black leather and Carbon Black Alcantara surrounding the driver. Electric and heated sports seats are embroidered with the MSO logo on the headrest and include a memory function. A tinted panoramic roof is standard and can be upgraded, for £4,750, to the ‘MSO Defined Electrochromic’ panoramic roof. This was exclusively designed for the 570GT and uses ‘smart glass’ technology to give a choice of five different ‘degrees’ of tint. The key for the MSO Black Collection has also been painted in Carbon Black and an exclusive dedication plate rounds off the interior upgrades.

McLaren has also introduced some driving enhancements with the Sport Pack, which it says gives the 570GT the sharper dynamics of the 570S model. The exhaust system has also been enhanced with the addition of a titanium ‘supersports’ exhaust, which is 5kg lighter than the standard 570GT’s, as well as 5dB louder. The final enhancement to the 570GT is the GT Upgrade Pack, which adds an electrical steering column, a rear-view camera, vehicle lift system and a 12-speaker Bowers & Wilkins sound system. 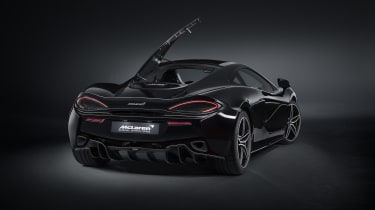 Set to be more exclusive than the McLaren Senna, the 570GT MSO Black Collection is limited to 100 examples worldwide and costs £179,950.