New Audi A1 on sale now 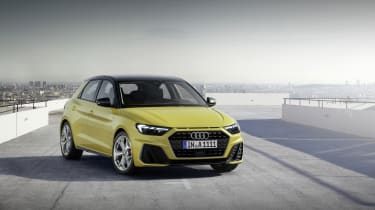 Carbuyer's full review of the new Audi A1

This second-generation Audi A1 shares its mechanical basis with the latest Volkswagen Polo and SEAT Ibiza, and is built alongside the latter at SEAT's factory in Martorell, Spain. The shared platform means a familiar range of TFSI petrol engines.

Front-wheel drive is standard, with a six-speed manual gearbox and the option of a seven-speed dual-clutch automatic. The flagship 40 TFSI, meanwhile, uses a six-speed S tronic automatic – there's no manual option on this model. You can choose a stiffened sports suspension setup across the range, with adaptive damping at extra cost. The new A1 ushers in new safety kit to the model for the first time, including adaptive cruise control and a pre-sense system that uses radar signals to detect and warn of vehicles, pedestrians and cyclist when weather hampers visibility.

In common with its Volkswagen Group stablemates, the all-new A1 is longer, wider and lower than its predecessor. It's 4,030mm long and 1,740mm wide and – at 1,410mm tall – some 50mm lower than the Polo, helping it look sleeker, despite being offered only in five-door Sportback form. This physical growth is said to greatly improve practicality, with a 335-litre boot that's 65 litres larger than before and a total of 1,090 litres available if you drop the rear seats. 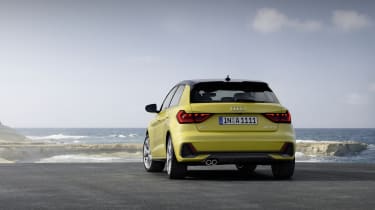 Audi's defining 'single-frame' grille is prominent, with a row of ventilation slats immediately above – a nod towards the iconic Sport Quattro rally car of the 1980s, which really put Audi's four-wheel-drive technology in the spotlight. Full-LED headlamps are new to the A1, and buyers can add alloy wheels of up to 19 inches in diameter.

The inside story revolves around an infotainment system that owes much to the flagship Audi A8 luxury saloon, with a sophisticated touchscreen taking the place of the previous pop-up display. A 10.1-inch screen is standard on high-spec A1s, with an 8.8-inch MMI Radio unit offered in entry-level and mid-range models. Apple CarPlay and Android Auto are standard as part of the Audi Smartphone interface. 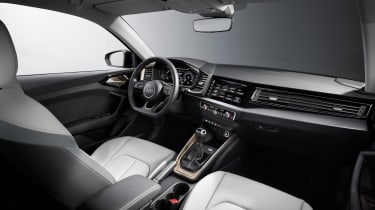 An all electronic instrument panel is standard across the range, and Audi's Virtual Cockpit digital instrument cluster is available. This offers driver-configurable displays of a variety of information types, including the option of displaying full-colour 3D mapping in your line of sight. In true Audi style, the options list is lengthy – wireless phone charging and a Bang & Olufsen stereo will be offered, as well as an upgraded MMI navigation plus system with access to social media, Google Earth and live traffic reporting.

With over 830,000 sales of the first-generation A1 racked up, Audi hopes the all-new car will see similar success.

Audi A1 pricing and availability

The Audi A1 30 TFSI is available now, with prices from £18,450 for the SE six-speed manual to £23,180 for the S line S tronic automatic. A full range of engines will follow in 2019, with pricing to be announced before order books open.