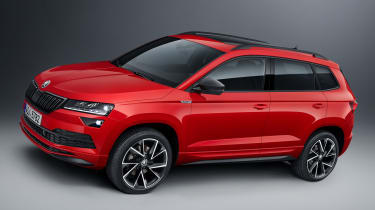 This is the new Skoda Karoq Sportline, the latest addition to the Karoq range to be announced ahead of its full public unveiling at this year’s Paris Motor Show in October. In stark contrast to the recently revealed off-road-focused Karoq Scout, the Karoq Sportline prioritises handling, performance and styling. Official UK specification and pricing have yet to be released, but the Sportline is likely to join the range towards the end of this year.

Four engines are set to be offered, with two diesels and two petrols to choose from. A 148bhp 1.5-litre petrol is joined by a Sportline-specific 2.0-litre petrol with 187bhp, while the diesels are both 2.0-litres, making 148 and 187bhp respectively. The two less powerful engines are paired as standard with a front-wheel-drive set-up and a six-speed manual gearbox, although a seven-speed DSG automatic and four-wheel drive can be specified. The most powerful diesel comes with this automatic gearbox and four-wheel-drive combination as standard; driveline details for the most powerful petrol haven't been announced, but the same combination is likely. 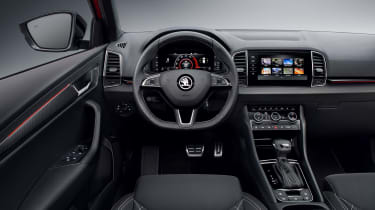 Optional equipment includes Skoda’s Virtual Cockpit digital dial set-up, which gains a unique display mode in the Sportline that puts the car’s rev counter and speed read-out in the centre of the screen. An optional wi-fi hotspot can also be specified. Full details of standard equipment have yet to be announced, but an powered bootlid with a 'tip-to-close' function features, with a foot-wave sensor for opening the boot when your hands are full. 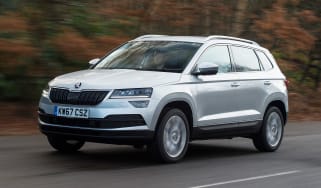 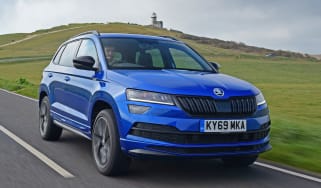