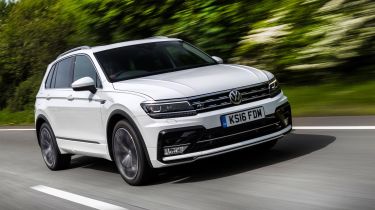 The Volkswagen Tiguan is a popular SUV in a crowded class contested by the likes of the Nissan Qashqai and BMW X1. In its current second-generation guise, the Tiguan has greatly increased appeal with added practicality, more of that crucial ‘quality feel’ and a more engaging driving experience.

The Tiguan R-Line, like all the latest Tiguan models, is based on VW’s extremely flexible and effective MQB platform. This accounts for improved driving characteristics across the line-up, as well as allowing VW to introduce a range of new safety and infotainment technologies.

Dealers offer the handsome if conservatively styled VW SUV for sale in a range of trims comprising the entry-level Tiguan S, the more comprehensively equipped Tiguan SE and SE Nav, plus the luxurious Tiguan SEL and this, the flagship R-Line. While SE and upwards provide all the creature comforts most drivers aspire to, R-Line adds sporty styling touches that will make your Tiguan stand out in a crowd.

It’s not a cheap option, as the Tiguan R-Line adds a chunky £8,000 to the cost of an already well-equipped SE – the latter comes with 18-inch wheels, an eight-inch touchscreen and adaptive cruise control with city braking. Your neighbours will see where the money goes if you splash out on the R-Line, though, as the list of extras includes flashy 20-inch alloy wheels, a styling pack with sporty-looking front and rear bumpers plus wheelarch extensions, swishy LED lights on the nose and a panoramic sunroof – however the LED lights and sunroof are also part of the less ostentatious and cheaper SEL trim.

Inside, R-Line and SEL models share a hi-tech 12.3-inch TFT screen instrument pack, while the R-Line features a sporty black headlining and alloy dashboard inserts. So at a superficial level, the R-Line delivers lots of eye-candy, but the extra cost is all for show. Upgrading from the (cheapest available) 149bhp TDI two-wheel-drive spec for greater performance will add more to your bill, with the punchiest 237bhp R-Line 2.0 BiTDI 4MOTION tipping over the £40,000 mark.

Sticking with the entry-level petrol or diesel gives adequate but unexciting performance, with 0-62mph around the 9.3-second mark. At the other end of the scale, the twin-turbo BiTDI completes the benchmark sprint in 6.5 seconds. Other engines available to R-Line buyers include the 149bhp 1.4-litre TSI petrol, the 178bhp 2.0-litre TSI petrol and a 188bhp 2.0-litre TDI diesel.

In spite of the performance caveat for the less powerful engines, buyers who opt for the Tiguan R-Line spec are unlikely to be disappointed with their choice. They’ll be buying one of the most effective crossover SUVs in its class, with a hugely practical boot, plenty of accommodation for all, and the reassurance of VW’s excellent safety technology.

Indeed the Tiguan’s popularity was demonstrated in our 2018 Driver Power satisfaction poll, where it finished just inside the top 30 best cars overall and recorded an impressive third place for its family-friendly interior storage.

It’s hard to recommend the Tiguan R-Line when the SE and SE Nav provide so much better value, but for those who want to stand out, the top-spec R-Line has obvious appeal.