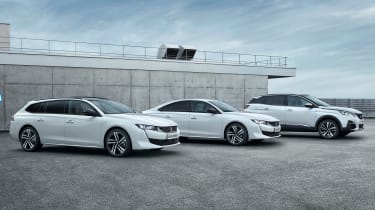 The Peugeot 508 and Peugeot 508 SW estate will both be available as hybrids before too long, managing around 30 miles of electric range. Prices, specifications and a release date are yet to be confirmed but it’s likely that the powerful hybrid versions will be the most expensive in the 508 range.

Unlike the recently revealed Peugeot 3008 Hybrid4, the Peugeot 508 Hybrid and 508 SW Hybrid get a front-wheel-drive setup from the off. A 178bhp PureTech petrol engine and 109bhp electric motor combine to produce up to 222bhp and send power to just to the front axle. They feature a smaller 11.8kWh battery pack, but it's enough to provide the same driving range as the bulkier 3008 Hybrid4. All three cars use a new e-EAT8 eight-speed automatic gearbox that can harness power from both electric and petrol sources.

The cars claim 217mpg, although this figure has been achieved in lab testing with the electric motor in use more than the petrol engine. These 508 hybrids will be most efficient for lower-mileage drivers, with a diesel model still making the most sense for regular motorway drivers. CO2 emissions of just 29g/km for the hatchback and 30g/km for the estate are impressive, and should appeal to both private and business customers. 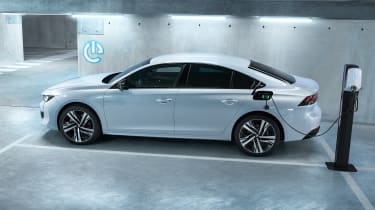 There are four driving modes, allowing you to choose how to use the electric and petrol power. A ‘Zero Emissions’ mode relies solely on the electric motor, ‘Sport’ combines the two for ultimate performance, ‘Hybrid’ automatically switches between petrol and electric depending on what is needed, and ‘Comfort’ uses settings from the Hybrid mode but with a softer suspension setup.

Peugeot hasn’t given any performance details yet but acceleration from 0-62mph should take around seven seconds or less, making the hybrids the quickest 508 models. Three of the standard trim levels - Allure, GT Line and GT - will be available.

Many plug-in hybrids can’t offer the same practicality as conventionally fuelled models due to the extra space needed for the battery, but the Peugeot 508 Hybrids come with exactly the same boot space as petrol and diesel models. You get 487 litres with the seats down in the saloon, or 530 in the estate.

The 508 hybrids arrive after the reveal of the Peugeot e-208 and e-2008 - the company’s first fully electric models - and will be joined by plenty more hybrid and electric cars in the coming years. By 2023, Peugeot is planning to offer every model in its line-up with at least one electrified option.

Read reviews of the 508 and 508 SW by clicking the links below, or read our guide to the best hybrid estates you can currently buy. 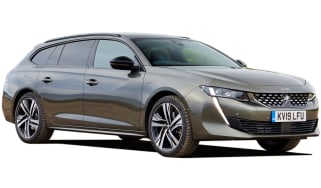