Volkswagen is planning to expand its pure electric ID. range with a VW Polo-sized model 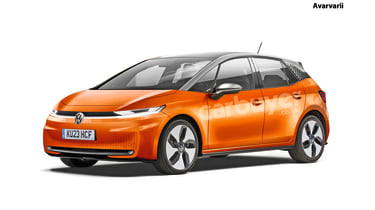 Volkswagen has revealed plans to expand its new pure-electric ID. range with a smaller entry-level model. The new car, expected to be called the ID.2 and a similar size to the Volkswagen Polo, will make use of its platform to offer as much space as a bigger hatchback, such as a Ford Focus. It may have a price tag of less than £20,000.

The newly revealed Volkswagen ID.3 might be the size of a Golf but its long wheelbase means there’s much more space inside - about the same as the larger Volkswagen Passat. VW is aiming to deliver similarly passenger-friendly packaging in the smaller car, which will rival the Peugeot e-208 and Vauxhall Corsa-e. However, both those rivals have underpinnings designed for both conventional engines and electric powertrains, whereas VW’s MEB platform is specifically meant for electric cars.

Best electric cars you can buy

Earlier this year, at the manufacturer’s annual conference, smaller ‘MEB entry family’ models were included in a slide showing the product lineup. It was previously thought that the ‘MEB’ platform underpinning the ID.3 and ID. Crozz SUV would not be used for a car less than 4.4 metres in length - about the same as the current VW Golf hatchback. 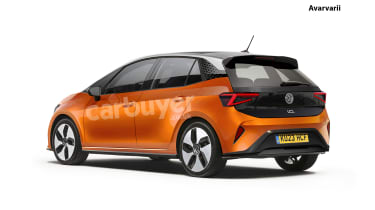 However, VW Group chairman Dr Herbert Diess told our sister publication Auto Express that any ‘entry family’ ID. models would be both compact and cheaper. “It’s a smaller size; it’s sub-Golf size. It’s being worked on now. We should expect it around 2023.”

Our exclusive images show how the Volkswagen ID.2 might look.

VW Group’s board member for technical development, Dr Frank Welsch, confirmed that advancing developments in battery technology are likely to lead to reduced costs, allowing VW to make n small electric car with a price tag of under £20,000.

“Every two or three years, we see improvements in battery technology and electrochemistry,” Welsch said. “If we speak about [a smaller] MEB entry, I don’t think it would happen before 2023, and there will be at least some improvements by then.

“But if you go for a smaller concept, where they don’t need a range of 500km, or where they could never afford a battery capacity of 80kWh, for example, it could be a possibility – especially when you keep in mind it should improve over the next three years.”

He added: “We are happy with the tech we have for the first wave of ID., and now we’re looking again at how we could bring the costs down.

“It’s no use going down from Golf size to Polo size, and then saying: ‘We’ve saved 50 euros on the bare chassis.’ We have to look across everything. Could we offer it with a smaller motor? It’s a smaller car, and you can get a Polo with lower-powered engines than you can get in a Golf.”

Welsch also stated that despite the ‘MEB entry family’ cars likely to receive short-range batteries helping to reduce the starting price, he sees no reason why longer-range models with larger batteries couldn’t be offered. “Because it’s part of MEB, we can still have larger capacities [of battery],” he said. “We wouldn’t need to stop at 40kWh, for example; if I have the space between the axles, I can use it. So even with a smaller wheelbase I could imagine going for, say, 60kWh, because we know from the Polo that some customers of that size of vehicle do want to go for longer journeys as well.”

Read more about the newly launched Volkswagen ID.3 hatch for full details, or read our list of the best hybrid and electric sports cars you can buy.