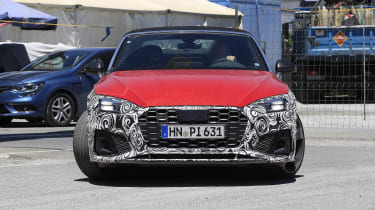 The Audi S5 is due to be facelifted. These spy shots suggest that the S5 Sportback and Cabriolet models will be treated to minor styling changes, and we already know that both are getting a diesel engine - like many of the S-badged cars in Audi’s current range. The new S5 is likely to make its debut at the 2019 Frankfurt Motor Show in September, and will go on sale before the end of the year. Prices will be revealed in the next few months.

We first saw the diesel-engined A5 Sportback earlier this year but it seems that Audi has chosen to give the S5 a facelift before putting them on sale. New tail-lights look very similar to the new Audi S4, and it’s likely that the S5 will share much of that car’s styling. The prototypes in these photos wear a similar front end to the current car, but it’s thought the new car will get sharper headlights with distinctive LED running lights, vents above the grille and silver-painted air intake surrounds.

The grille will be slightly larger but will remain six-sided, featuring a new mesh design and gloss black detailing. From front to back the Audi S5 Cabriolet and Sportback will look sportier than the standard A5 versions, with more aggressive bumpers, silver door mirror caps, large alloy wheels, a small boot lip spoiler and four exhaust pipes. 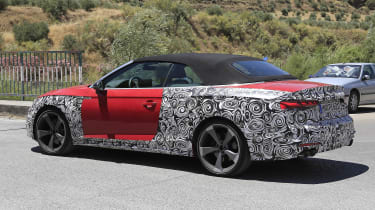 It might seem strange that Audi is switching to diesel for some of its performance models, especially when diesel sales have dropped dramatically in Europe. However, the new 3.0-litre V6 diesel engine produces 342bhp - more than the outgoing 3.0-litre V6 petrol engine - which means 0-62mph takes just 4.8 seconds for the Audi S5 coupe (4.9 seconds in the Cabriolet and Sportback). The torque figure is even more impressive; with 700Nm available, the S5 will pull hard in any gear.

Alongside the diesel engine, the new S5 employs the latest mild-hybrid technology to further reduce emissions and fuel consumption. The car uses a 48V starter system to allow the engine to cut off without shutting down the radio, lights and other ancillary functions. Take your foot off the accelerator between 34 and 99mph, and the S5 can coast on electric power alone for up to 40 seconds at a time. It also harvests some of the energy created when you brake to recharge its lithium-ion battery.

The engine management software also takes data from the sat nav and onboard sensors to work out how to be most efficient at any given time. The car will choose to coast, freewheel or recuperate energy without your input. The start-stop system kicks in at 13mph and below, and will automatically re-engage as soon as it recognises that the car in front is moving.

Meanwhile, Audi has also fitted an electric powered compressor (EPC) to help provide immediate power and fast acceleration. The EPC fills in the gaps when the turbocharger is getting up to speed, which means the gearbox has to shift down less often.

As is now usual, all S5 models will feature Audi’s quattro four-wheel-drive system and an eight-speed Tiptronic automatic gearbox. The four-wheel-drive system can shuffle power between the front and rear wheels, depending on the road surface and how the car reacts. There’s also an optional sportier differential, which pushes the car into corners and works to reduce understeer. 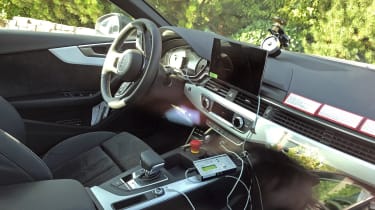 Inside, it seems that Audi will offer the new S5 with a much larger infotainment touchscreen than is currently fitted. It looks like the 10.1-inch screen available in larger and more expensive Audi models but the rotary control dial seems to have disappeared; you’ll need to touch the screen or perhaps use voice or gesture control to operate its features. The new Audi S5 will also come with LED lights all-round with dynamic indicators, power-adjustable heated Alcantara suede front seats, adaptive cruise control and rear cross-traffic assist. Other safety features include collision avoidance and traffic jam assist.

Read our current Audi S5 review, or see how it compares to the BMW 4 Series. 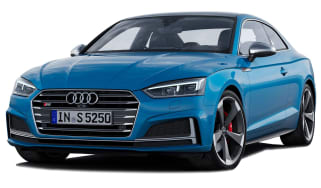