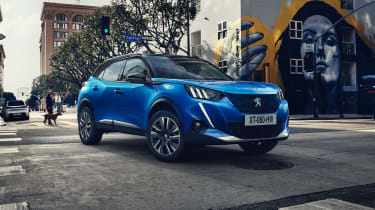 The equipment level is roughly the same regardless of whether you choose a conventional petrol or diesel engine or an electric motor, and Active kicks off the range with 16-inch alloy wheels, rear parking sensors, air conditioning and a seven-inch touchscreen. Allure, which starts at £22,350 for petrol models and £30,300 for electric versions, adds larger alloy wheels, roof rails, a variable depth boot floor and front parking sensors.

What are the best small SUVs you can buy?

GT Line and GT models both come with two-tone 18-inch alloy wheels and sportier looks. Inside, heated seats and a 10-inch touchscreen with sat nav and a reversing camera are all standard. The GT specification adds a panoramic sunroof and more driver assistance systems, but it’s only available with the most powerful petrol engine or the electric motor. GT Line cars cost from £26,100 (petrol) or £32,000 (electric), while the GT costs either £31,575 or £34,275 respectively. 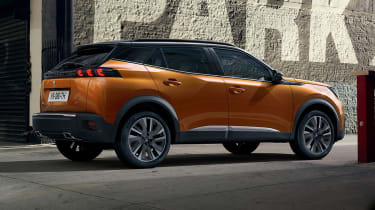 Looking like a smaller version of the Peugeot 3008, the new 2008 has morphed into a proper SUV instead of a halfway-house crossover. It has plenty of ground clearance, big wheels and a large bonnet, and features plenty of eye-catching details. The ‘fang’ LED daytime running lights are brought over from the Peugeot 508 and new Peugeot 208, while the black rear lightbar has already been seen on those cars too. A black roof is standard on high-spec cars.

Unlike some other cars, it’s not only top-spec models of the 2008 that get the option of electric power. The e-2008 will be available in all trim levels and, besides a body-coloured grille, different badges and the absence of exhaust pipes, there’s little to tell it apart from petrol or diesel versions. The company didn’t want the new Peugeot 2008 to be thought of as an electric car; instead it says it’s a ‘normal car with electrification’.

Buyers of the e-2008 get an electric car with a 50kWh battery that provides a range of between 191 and 206 miles (based on the stricter new WLTP test). That’s less than the 211 miles available in the Peugeot e-208, and much less than rivals like the Kia e-Niro and Hyundai Kona Electric. It gets fast-charging, however, so recharging to 80% will take half an hour. Charging from a 7.4kW or 11kW charger will take 7.5 and five hours respectively.

For the rest of the range, there are three 1.2-litre PureTech petrol engines with either 99, 128 or 153bhp, plus a 99bhp 1.5-litre BlueHDi diesel engine. An automatic gearbox is available on the two most powerful petrol engines. The petrol engines return between 46.6 and 52mpg, while the diesel is most frugal at 62.7mpg. Both 99bhp engines manage 0-62mph in around 11 seconds, while the 128bhp version reduces this to 9.0 seconds. The most powerful 153bhp version is the quickest 2008, managing 0-62mph in 8.2 seconds.

While the exterior styling will immediately catch the eye, it’s the interior that may ultimately tempt buyers. The quality of the materials is a real step up over the current Peugeot 2008, with plush-feeling soft-touch surfaces throughout. It’s easily a match for Volkswagen’s small SUVs, and comes with plenty of tech too. All cars get a 3D digital instrument cluster above the small steering wheel, and all trims except Active get a 10-inch infotainment touchscreen. The 208 and 2008 are the first cars to benefit from the latest version of Peugeot’s iCockpit software. Wireless phone charging, smartphone screen mirroring and USB-C sockets are all available. 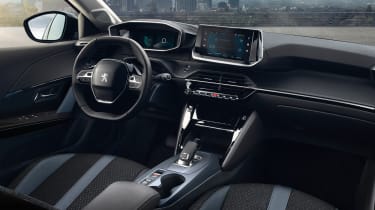 The car comes with plenty of safety equipment, but a full five-star Euro NCAP safety rating applies for cars with the optional safety pack; standard cars get a four-star rating. Adaptive cruise control and lane-keeping assistance allow the car to drive itself in some situations, and you can have automatic emergency braking, road sign recognition, high-beam headlight assistance and self-parking ability.

The new Peugeot 2008 sits on PSA’s small-car platform called CMA but it’s nearly as big as the 3008 family SUV. It’s bigger than the current 2008 in most ways - it’s 140mm longer, 30mm wider and there’s an extra 60mm between the front and rear wheels (called the wheelbase). As a result, there’s plenty of space for two tall adults to sit behind each other comfortably and the boot is slightly bigger at 434 litres. The boot will have a false floor, so you’ll be able to store valuables or the EV’s charging cables out of sight.

Two of the 2008’s main rivals, the Renault Captur and Nissan Juke, have both been updated. Read our reviews of these cars by clicking the links.