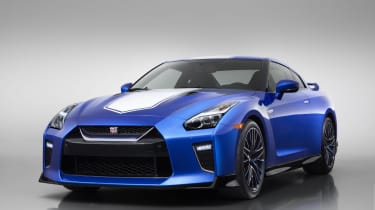 The price of the Nissan GT-R 50th Anniversary special edition model has been revealed. It’ll cost from £92,995, and deliveries will start at the end of August. The 50th Anniversary model is limited to just 50 European cars, and only 18 examples will be heading to the UK in right-hand-drive.

This version of the 2019 Nissan GT-R stands out with a special Bayside Blue paint colour, which was last available on the previous ‘R34’ generation of the Skyline GT-R. Four coats of paint are used, and contrasting white racing stripes have been added.

Over the standard GT-R, the 50th Anniversary also adds new 20-inch alloy wheels with blue accents and a handful of exclusive badges. 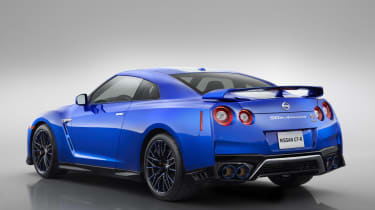 Inside, the car is fitted with the GT-R’s ‘Prestige’ interior trim with grey leather upholstery. The roof lining and sun visors are wrapped in Alcantara suede fabric, to give the GT-R 50th Anniversary an even sportier feel.

Like the standard GT-R, there are carbon fibre inserts, a Bose sound system, gearshift paddles and an 8-inch central infotainment touchscreen that can display digital instrumentation and performance data or sat nav.

A dedicated finance offer for the GT-R and 370Z 50th Anniversary editions is now available if you would prefer to spread the cost over three years. The 5% APR finance deal includes a £5,000 Nissan deposit contribution and a servicing package worth £500, although monthly payments have not been confirmed.

The Nissan GT-R 50th Anniversary was unveiled earlier this year at the 2019 New York International Auto Show, alongside the 50th Anniversary version of the Nissan 370Z sports car. The limited-run 370Z is already on sale, costing £38,995. Only 22 UK cars are being produced.

“The Nissan GT-R has been the icon of our company’s driving performance for the past half-century,” said the GT-R programme director, Shinichiro Irie. “We were highly motivated to ensure that the GT-R 50th Anniversary Edition stands out.”

Read our Nissan GT-R review for more information, or see why it’s one of the slowest-depreciating cars on sale.