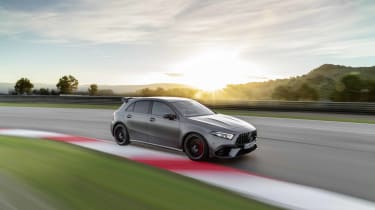 The Mercedes-AMG A45 S starts from £50,570. It’s the second generation of Mercedes’ most powerful hatchback, and it’s available to order now. First customer deliveries are scheduled to take place towards the end of this year.

The A45 S is the first production hot hatchback to have more than 400bhp. The new Mercedes-AMG A45 will have 382bhp in Europe but an A45 S variant, the only version coming to the UK, has 415bhp. The A45 was revealed at the 2019 Goodwood Festival of Speed, alongside the equally powerful Mercedes-AMG CLA 45.

It rivals the Audi RS3 and the upcoming BMW M135i. 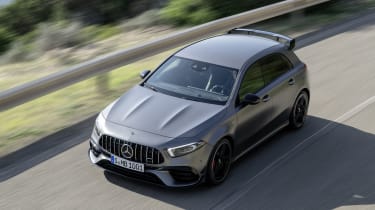 The A45 S has 415bhp and manages the 0-62mph sprint in only 3.9 seconds. Its top speed is limited to 168mph. Not only is it the first production hot hatchback to break the four-second threshold, but it’s actually faster than the V8-engined Mercedes-AMG GT.

The A45 uses a completely reworked 2.0-litre turbocharged engine, which is the most powerful four-cylinder engine ever produced. The layout of the engine is said to help with aerodynamics and cooling, which both help the baby AMG to go faster than before. Mercedes’ 4MATIC all-wheel-drive system is standard, as is an eight-speed dual-clutch automatic gearbox with paddles behind the steering wheel.

There are six different drive modes called Slippery, Comfort, Sport, Sport+, Individual and Race. These setups adjust the weight of the steering, the response from the engine and throttle, and the exhaust and traction control settings.

As is now common with four-wheel-drive fast hatchbacks, the AMG A45 S comes with a drift mode. When you’re in the Race setting, the car’s computer can slide the rear end out slightly and keep a controlled drift for as long as you want. This feature can be chosen as an option on the standard A45 but both cars are able to shift power between individual wheels as standard.

The Mercedes-AMG A45 gets special AMG-tuned suspension, which should provide better ride comfort, grip and agility over the old model. AMG Ride Control adaptive suspension is available on the options list, letting you choose between more comfortable and firmer settings. To cope with the extra power, the 415bhp A45 S gets bigger brakes and fixed calipers. 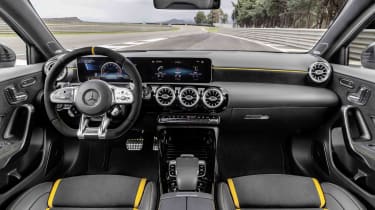 Thanks to an even more aggressive bodykit than the Mercedes-AMG A35, the A45 looks sportier and racetrack-ready. An AMG Aerodynamic package is standard, adding a front splitter, fins on the front bumper and a boot spoiler. Mercedes has even strengthened the car's bodyshell.

Inside, the now-familiar Mercedes ‘MBUX’ dual-screen infotainment system offers extra functionality, which is unique to the A45. It features layouts of some of Europe’s best-known racetracks and it can accurately record lap times and individual sector times. With the front-mounted camera, the infotainment display can show a real-time view of the circuit you’re on and even the best racing line you should aim for. Until recently, you could only get this on video games.

The A45 features upholstery trimmed in man-made leather and suede-like fabric. Sporty and supportive bucket seats and a flat-bottomed steering wheel are fitted as standard, but you can make the interior even racier by choosing one of the AMG interior packages from the options list.

Read our guide to the best driver’s cars you can buy, or read about the newly revealed Mercedes-AMG CLA 45.